This year there are two studio films about friends who decide to get it on without complications. Both are romantic comedies about how the leads fall in love but fight it. Both star one actor from That 70s Show and one who has done Saturday Night Live musical parodies. So, who wins out in the battle of the same movie premise? Find out in our review of Screen Gems’ Friends With Benefits after the break.

Friends With Benefits was actually the original title for No Strings Attached, released in January of this year, so there is bound to be some confusion. Fortunately, the real Friends With Benefits, starring Justin Timberlake and Mila Kunis, fulfills the potential that No Strings Attached couldn’t reach. Kunis stars as Jamie, a headhunter for GQ who convinces Dylan (Timberlake) to leave his successful blog in Los Angeles and join the magazine in New York as creative director (I believe that’s the job’s title). The two quickly become friends and enjoy the single life, but they both miss having sex, so they decide to become friends with benefits. Things get complicated with it’s obvious to everyone but them that they develop real feelings for each other.

I’m not a big romantic comedy fan, but I can appreciate a good one when it comes around. What interested me about this film was that it was marketed as being critical of all the rom com cliches, and it definitely is. The characters constantly make jokes and comments about how terrible and unrealistic that genre is, and we even see scenes from a fake movie starring Jason Segel and Rashida Jones as the romantic leads. It’s a bit over the top, but it definitely gets the point across. 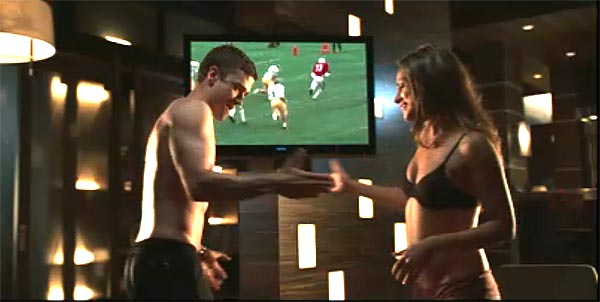 What’s really important is that this film is funny. Timberlake and Kunis have great chemistry and comedic presence, and even the supporting characters shine. Woody Harrelson steals the show as usual, playing a gay sports columnist for GQ, and Patricia Clarkson is quite different as Jamie’s mother. While I was a bit jarred by the suddenly serious storyline involving Dylan’s father (played perfectly by Richard Jenkins), it was definitely important to the plot and moving the characters forward.

Even though the film makes fun of cliches and bad humor in movies, there’s still some of those problems here, but mostly the jokes are dead on, especially since they are so true to the experience of sexual relationships. They made the most out the R rating thanks to plenty of vulgarity, sex, and nudity (mostly from the back and mostly Timberlake).

Overall, Friends With Benefits is a good kick in the pants to romantic comedies while still allowing itself to (somewhat ironically) play into the cliches we know and love. The film, directed by Will Gluck (Easy A) and written by Gluck, Keith Merryman, and David A. Newman, opens in theaters on July 22nd. 3.5/5