Since Disney made Marvel a partner, the studio has gone a long way to assemble some of the greatest heroes known to the Marvel Cinematic Universe. After President and Producer of Marvel Studios Kevin Feige walked onto the stage he presented a clip from the upcoming Avengers. So here is a brief description from it.

Before the actual clips starts, we see the roster of heroes that make up the Avengers. These clips have been assembled and mashed together from the Marvel cinematic universe and after it ended Fegie walked out onto the stage to introduce a never before seen clip from the upcoming film.

The clips opens with Nick Fury (Samuel L. Jackson) explaining the new prison that Loki has just walked into. It seems very apparent that the two are high above the sky in the S.H.I.E.L.D. Helicarrier, after Fury opens a large hatch that reveals a furious thunderstorm. After telling Loki he would die if he attempts to breakout, the god of mischief gives that look that even if Fury does push the release button, nothing would happen to him. Fury reveals that this cage was meant for something far stronger and menacing that him.

We then see the Black Widow look at Dr. Bruce Banner (Mark Ruffalo) who tells he that he can grow on you. Else where we see Agent Maria Hill looking over Fury and Loki conversing.

Loki begins to mock Fury for having power within his reach and then have it taken away from him after someone with real power takes it away. He continues his belittling of Fury by telling him that he as assembled some of the weakest heroes.

We then transition to a few quick clips of quinjets, Loki possibly escaping, Thor summoning thunder, some large explosions, and more.

Finally we see Tony Stark starting to do a roll call for the Avengers. He says that he has two top class assassins, a “demi-god”, and “living legend who lives up to his legend” It is revealed that he is talking to Loki. Stark adds that the god has managed to “piss off all of them.” Loki quickly spits out that he has an army. Stark quickly fires back by saying The Avengers have the Hulk. We then see a very quick glimpse of the Hulk snarling. 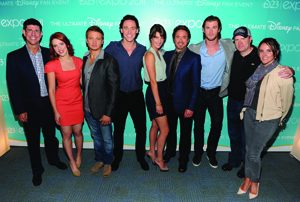 Overall the footage was decent, but not too spectacular. I expected a little bit more than what they presented, but it was satisfactory. After the clip, Feige introduced Tom Hiddleson (Loki from Thor), Colbie Smulders (Maria Hill of S.H.I.E.L.D), Jeremy Renner (Hawkeye from Thor), Scarlett Johansson (Black Widow from Iron Man II), Chris Hemsworth (Thor), and Robert Downey Jr. After the explosive introduction that got the entire arena riled up, Robert Downey Jr. asked the audience if they wanted to see the footage again. There was a unanimous yes, from the crowd, and soon enough the clip was put back up on screen and the cast left the panel with no questions from Feige or the audience. From what we saw we know that Loki is the villain, and that his assumed Army could possibly be the Skrulls.
With that the studio presentation was over.