Walt Disney Studios is also known for their live action films they bring to the big screen. John Carter, The Muppets, and Oz: The Great and Powerful were among the most highly anticipated portions of the live-action panel. So hit the jump for more on Disney’s hopeful blockbusters.

Disney will start off their live action films in a big way with John Carter opening March 13, 2012. From director Andrew Stanton, the film will bring the planet Mars to life with Taylor Kitsch, who plays the titular role, Lynn Collins, and Willem Dafoe. Stanton talked about Tars Tarkas (Dafoe) as he is the one who plays the alien. Stanton spoke about how the actor was standing on three foot stilts to give his character some truth and life. Seeing has Dafoe’s character is a nine foot alien, its understandable that he needed the extra height, but not only that, they showed Dafoe dressed in a grey motion capture suit.

The audience then saw four clips from the film. The first was John Carter landing on the planet. He soon realizes that he isn’t on his home planet when he sees aliens eggs hatching through a glass window. As he tries to figure out where he is, a group of aliens open fire on him. Thanks to the difference in gravity, Carter doesn’t jump but rather leaps into the air.

Carter successfully shields himself from his would-be captors, only to have Jeddak calm the situation down, by convincing the rest of the alien pursuers that he will safely bring him in. He tries to by disarming himself and raising his arms. He then introduces himself as Tars, but thinks that Carter’s name is Virgina.

Since the two do not speak the same language, care Jeddak motions Carter to jump into the air again. Understanding this, he leaps into the air, using it as an oppurtunity to seize the weapons that Jeddak had left on the floor. Jeddak successfully reaches him and tries to stop Carter from bringing harm to himself. Soon the aliens raise their weapons and the scene ends with one of the two wailing in pain.

Our second clip has Carter imprisoned in a Thark nursery. Knowing that he possesses a large amount of strength, Carter pull off his chains that were embedded into the wall. But as soon as he tries to escape a reptilian canine bumbles in. As the it dozes off, Carter leaps into the air once more to escape his captivity. Unfortunately he sees the same creature right in front of him. Not realizing that it has great speed, Carter tries to elude it again by leaping. But it soon becomes apparent that the creature is quick on his feet, and Carter tries to shoo it away.

We then see a clip of Lynn Collins and Kitsch. Clearly the two are destined to be with each other but can’t because Dejah Torres (Collins) is marrying someone whom she despises. Torres says that she has an amulet that would allow her to return to Carter from where he came from, but only if he chooses too. Guards start to pound on the door, because of Torres as not responded to their questions. Carter seemingly wants to go home and starts to chant with her. But as Torres and Carter recite the spell, Carter stops, and guards step in to check if Torres is alright. When one asks if she is alone, she metaphorically responds by saying “I am alone.”

The series ends with Tars Tarkas (Dafoe) and Carter battling for their lives in a canyon like coliseum. Like most of these scenes, they are made for entertainment. So we see a roaring crowd begging for blood to be spilled. The guardsmen unleashes a white ape (a large ape like creature with fangs and four arms). Unfortunately Tars gets the most of the abuse, while Carter tries to adapt to being chained to a rock. 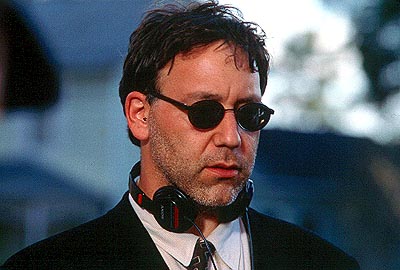 With the John Carter portion over, the panel shifted its gears to Oz: The Great and Powerful. The film starring James Franco as the titular character, Mila Kunis, Rachel Weisz, and Michelle Williams as the three witches, and Zach Braff as Oz’s unappreciated assistant. Bailey did say that production for Oz has just started in Detroit, but gave use a quick behind the scenes look at the filming process. It all began with an intro from director Sam Raimi, who said he was disappointed that he could not attend the expo, but was excited that he could bring some of early footage to attendees. He started to talk about the history of Oz and what brought him to the world of it. It is revealed that Oz was a masterful magician for a traveling circus. Although we never get to see any real footage, we see some of the concept art that will inspire the movie. Believe me the concept art that they showed was amazing, and I can’t wait to see it come alive in 2013.

Finally we saw the panel for The Muppets. After all the cheers, we see Kermit the Frog and Jason Segel being wheeled in. There isn’t much in this presentation besides the typical release of clips.

The first clip was of Jason Segel, Amy Adams, and Walter (Segel’s puppet friend) looking for Kermits house. After attempting to find a way to contact Kermit, Walter suggests that he be thrown over the fence. Segel agrees, even though Adams warns them that it is an electric fence. Segel fails to toss Walter over and is hilariously electrocuted. Of course the puppet faints, but he loses consciousness again when Kermit walks in wondering what the three are doing outside his property.

The clip continues on when Walter finally comes to. As the puppet nearly loses it knowing he is inside his idols house, Segel and Adams help him gain his composure, while Kermit tells his butler robot that the three do not need anything. The robot leaves, bumping into walls and muttering phrases like “gag me with a spoon”

The second clip has Kermit and the rest of the Muppet gang walk into the Muppets Studio for the first time. Since a large amount of time has passed the studio is obviously dirty. The group is overwhelmed with the amount of garbage that has compiled throughout the years, but as Amy Adam’s points out, they do everything with a song. The gang then cheers up and starts to furiously clean the studio to Starships’ “We Built This City”. All sorts of hilarious antics ensue and Segel, Adams, and the rest of the Muppets Crew finally get their studio ready to its big reopening.