Dimension Films’ Apollo 18 is a found footage sci-fi thriller about a secret mission to the moon back in December of 1974 that went horribly wrong. For the viral campaign, the film’s official website has a subpage that updates periodically with several documents from before, after, and during the mission. The latest documents are internal memos at NASA that show how they knew something was up.

Check out the documents below (unlocked with password “surveillance”). The first, titled “disrupt”, talks about a strange disruption to the lunar module. The second document explains how several cameras in the module went out, yet troubleshooting has not been able to fix them. These obviously hint that something is on the lunar surface causing these problems. 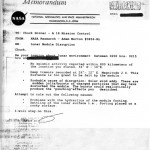 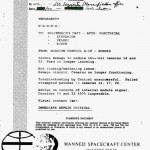 You can follow all our coverage at our Apollo 18 Hub. The film opens in theaters this Friday!