Over at Bloody-Disgusting, they have posted a large group of hi-def photos for the upcoming “viral” flick, Contagion. Of particular note, one of said pictures has what very well could have been a viral campaign in the making, but with the film coming out next week, why did we see nothing? Take a look to see what I mean.

With Contagion in theaters next week (September 9th), and with a film about a virus just screaming viral, why not launch it? Take a look at the flyer Jude Law is placing in the windshield and you will see. 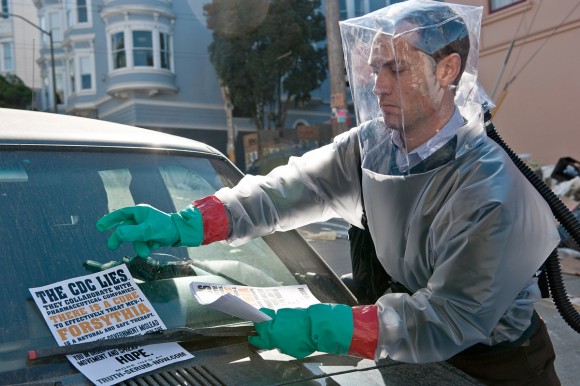 As you can see from the image, there is a website to reach out to known as “truth-serum-now.com” yet when you go to the site, there is absolutely nothing but site recommendations. Warner Brothers even owns the site’s domain, and yet nothing? Maybe something will show in the next day or two, or maybe it was trashed from the start? So why nothing? At this point and with an incredible lack of marketing, who knows.

Contagion follows the rapid progress of a lethal airborne virus that kills within days. As the fast-moving epidemic grows, the worldwide medical community races to find a cure and control the panic that spreads faster than the virus itself. At the same time, ordinary people struggle to survive in a society coming apart.

Thoughts on the unclaimed viral? Let us know below!