Movie Review: “Apollo 18” Makes A Mess Out Of A Good Idea

This weekend, Dimension Films released Apollo 18, a found footage sci-fi thriller for which we have been covering the viral campaign. Read my full review after the break (warning: some spoilers).

The premise of the film is that LunarTruth.com, a (fake) space conspiracy website, has obtained footage of the Apollo 18 mission to the lunar surface. What makes this footage so special is that officially Apollo 17 was the last manned mission to the Moon. Apollo 18 was a classified mission, and we see from the footage why that is. Lunar Truth has put together the footage with necessary editing, captions, and even spotlighting to better tell the narrative of what happened to the three astronauts who are on the Moon to install a device to spy on Russian communications (the film takes place in December of 1974 during the Cold War). However, before they can head back to Earth, strange things start to happen.

I obviously don’t want to give too much away, but if you have seen the trailers, than you know that there is something else on the lunar surface with our protagonists, and that is where the horror lies. The whole Lunar Truth framing of the story is actually pretty smart, as it presents a good reason for audiences to be seeing classified information, as well as alleviating the lack of editing, focus, and clarity, that found footage could cause. The mission itself is designed to be documented, so we get lots of different cameras.

I was excited for Apollo 18 simply because I love outer space and alternative stories that could find a way to fit into known history. The found footage aspect obviously intrigued me, as I had yet to see a true sci-fi film shot in this manner. As an entry into the found footage sub genre, Apollo 18 doesn’t deviate from the norm too much. The category became mainstream thanks to the likes of The Blair Witch Project, Cloverfield, and Paranormal Activity, with Hollywood studios finding the style especially useful for horror. By making the camera a character or at least part of the environment, the audience feels closer to the action, thus more vulnerable to scares. In fact, Apollo 18 shares a lot of similarities to Paranormal Activity in tone. While the multiple cameras help spice things up a bit, we are still left with a film that is mostly slow, has a lot of build up with lackluster payoff, and an impressive end to give us the creeps for a while. 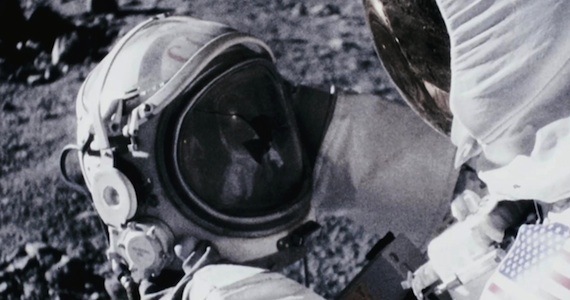 Apollo 18 has several things going for it. As implied above, if you liked Paranormal Activity, you will probably like this. There are plenty of moments where you’ll be gripping your seat, just waiting for something terrible to pop up on screen. Also, I found it to be very realistic despite the small budget, which is partly due to the style in which it was filmed. From my basic knowledge of space exploration history, it seemed to be dead on. I really liked the climax and the implication that the problem could be bigger than what we see in the film. The twist as to the “reason we’ve never gone back to the moon” is a bit silly when you think about it, but in the moment it’s really cool and it plays well on screen.

My biggest issue with the film, probably ironically, comes from its filming style. We don’t get to see much thanks to the film emulating 1970s cameras and several convenient outages or scrambled signals. That would be fine for effect, but we also have a hard time keeping up with what’s going on, why the characters are doing what they are doing, and even hearing some of the dialogue when the astronauts are in spacesuits. The pace of the film is also dictated by the filming style. While I found all the necessary footage leading up to the moon landing itself fascinating, I know a lot of people will get bored with the first third of the film.

Overall, while Apollo 18 might not have lived up to its potential to make a truly intelligent and scary sci-fi horror film using the found footage filming style, there’s enough little nuggets to make it worth watching, at least for us space (and conspiracy) nuts. 2.5/5 stars

P.S. The Lunar Truth website and suspected viral site ApolloTruth.org are both down as of the writing of this review. Could this mean there was a big enough audience to crash their servers? We’ll have a full review of the Apollo 18 viral campaign later this weekend.