On Saturday I gave you my impression of the film itself, but now it’s time to talk about the viral campaign for the found footage sci-fi thriller Apollo 18. Could it be more interesting than the film itself? Reminisce with me after the break (warning: some spoilers).

It all started last November when we first heard about the film and a potential viral video that turned out to be fake. As a fan of space exploration history, I was especially intrigued by the film’s plot; that there was secret mission to the Moon, that we possibly found extraterrestrial life, and that this was the footage from said mision. That same article had the film’s first poster with the tagline “There’s a reason we’ve never gone back to the Moon”. I was instantly hooked.

Dimension Films focused their marketing campaign on the idea that the film was real, and the footage was actually from a secret moon mission. This lead to a viral campaign starting in December that centered around a subpage of the film’s official website. Apollo18Movie.Net/Cosmonauts was a remote terminal that gradually revealed top secret documents about the Apollo 18 mission. We got some really great details about the events leading up to the launch, and there were little to no historical inaccuracies. It was nice to see that the marketers (and thus hopefully the filmmakers) took the time to be as authentic as they could so that the events in the film could theoretically fit into the established history.

What did these documents reveal? First, we learned that the cancellation of Apollo missions 18, 19, and 20 were changed to postponements for some unknown reason. Because of the large amounts of redactions, many of the documents don’t really tell us much, even after watching the film. Our next document outlined the directives of the three potential missions, then we got a general date (December 1974) for the Apollo 18 mission. The fourth document suggested we were working with the Soviet Union on the mission, which acts as a bit of a spoiler to the film itself.

We next got two pages from a book or article that discussed the implications of the discovery of extraterrestrial life and man going into space. While it seems benign, there is a bolded text that talks about artifacts being left by aliens on the Moon. Next we got a document that shows a probable alien radio signal in 1972, which might have been a catalyst for reinstating the last three Apollo missions (another catalyst is revealed in the film).

After a simple T-Minus Checklist, we finally got a trailer for the film. It’s important to note here that the majority of our documents were being released in January, and the next two didn’t come out until the beginning of March. At this point the release of the film had already been pushed back from March 4th to April 22nd. These two new documents were quite interesting, as one stated that something mysterious happened to the Soviet unmanned lunar rover Lunokhod 2, which is known in real history for covering 23 miles, the most ever for any robotic rover at the time. The other document talked about cameras to be installed for the mission, which helps explain why we have so many great camera angles in the film. Later in March, we get a document that proves that alien life was found on the Apollo 18 mission.

Thanks to some more release date shuffling (pushing back to January 2012, then up to August of this year, before settling on September 2nd), we had a long hiatus until a new document was released in early August. It was a page from a transcript of the Apollo 18 mission that shows they hearing something outside the Lunar Module while on the Moon’s surface. The next document was in Russian, but thanks to a rough translation, I think now it may be talking about a particular Soviet-related situation that develops in the film.

We continue to get more documents from the mission itself. We have evidence of unusual seismic activity on the lunar surface, as well as internal cameras getting damaged in unknown fashions. A psych evaluation of one of crew members could tell us something, but the handwriting is hard to make out. Our final document is a letter from the Soviet Union to the United States confirming that they want to work together to figure this thing out. Whether this is before or after the Apollo 18 mission is unclear. 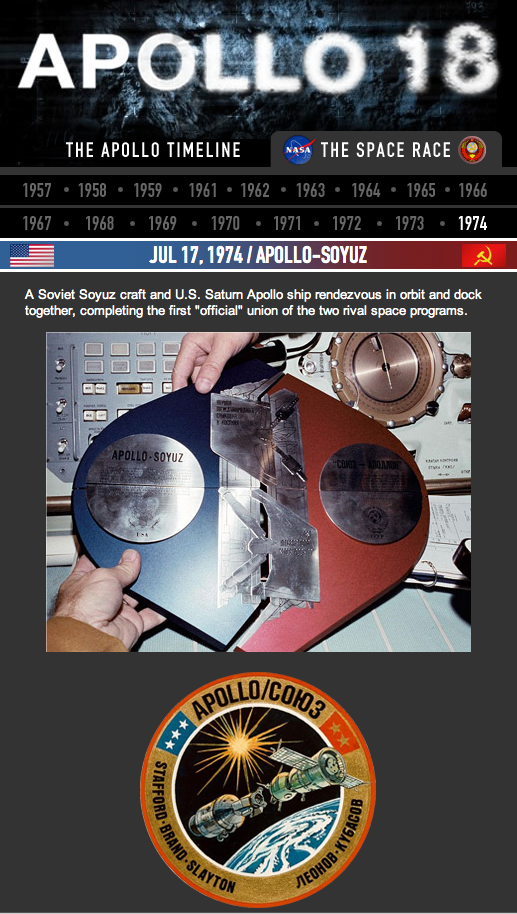 I personally liked the campaign, but it’s easy to tell that it didn’t work out very well. Aside from the film’s weak opening (which isn’t so bad when you realize the budget was reportedly only $5 million), there just wasn’t much buzz about this part of the film’s marketing. The Apollo 18 Facebook Page was popular and well executed, and NASA even had to deny that the film was real footage, but I saw very few people online talking about the Cosmonauts subpage. Why is this? My guess is that it was too nerdy and had little payoff. Sure, there are those like me who are fascinated with the detail given to the documents, but we are definitely a minority, and those not like us got nothing in return for their efforts. If you had questions after the watching the film, you would find very few real answers in the documents.

Obviously the release date debacle hurt the campaign. We saw the vast majority of the documents released in either January or August, and without a progressive narrative, it is hard to keep an audience. More interactiveness could have helped as well, as the only thing we had to do to get the documents was find a password.

Finally, the website ApolloTruth.Org was suspected of being part of the campaign, but it never came into play. However, the website is down in a similar fashion to LunarTruth.com, which is the website the film itself names. If this website was created by the marketers, then it was a waste of a good idea (kind of like the movie).