Season 3 of ABC’s hit show Castle comes out on DVD today. The show follows detective novelist Richard Castle (played perfectly by geek favorite Nathan Fillion) as he partners with Detective Kate Beckett (Stana Katic), who is the muse for his latest series of novels about fictional Detective Nikki Heat. Read our review of the Season 3 DVD after the break.

Castle is one of the few shows we have covered here on MovieViral that isn’t on NBC or HBO. The series has done a great job of embracing the geek culture and social media. For instance, a Nikki Heat novel is published every year to coincide with it being published within the world of Castle. The show even makes direct references to the book, including such details as pages numbers that match up in real life. Last summer, the Twitter account for Richard Castle told a real-time crime story set within the Castle world.

This past season took the show in a darker direction, as we dived much more deeply into the murder of Beckett’s mother. That lead to a shocking revelation in the finale that played out beautifully yet tragically. We also saw Beckett and Castle’s relationship start to strain from the romantic tension that could never be relieved thanks to obstacles in their way and sometimes just plain stubbornness. Castle is yet another procedural with a gimmick, but the act doesn’t wear thin after three seasons, which I would attribute to the great writing that allows the actors to play to their strengths. You come for the stories, but you stay for the characters. 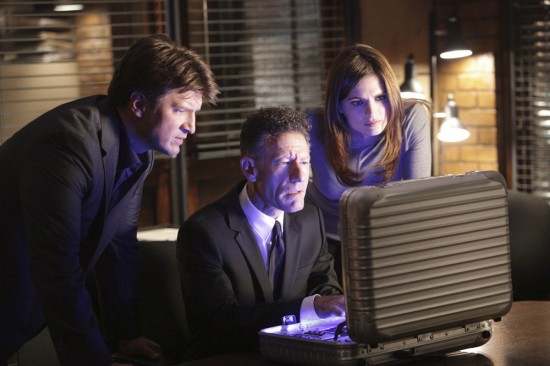 The DVD for Castle Season 3 isn’t chock-full of extras, but what is does have definitely deliver. My favorites are the featurettes “Murder They Wrote”, where the real novelists sometimes featured on the show have a roundtable discussion of the producers of the show, and “Murder Board 101”, where we learn how meticulously the murder boards featured at the police station are put together. Below is the full list of extras.

• Deleted Scenes And Bloopers
• Murder They Wrote — Follow This Roundtable Discussion As Icons From The World Of Mystery-Solving Discuss Tricks Of The Trade With CASTLE Star Nathan Fillion And Executive Producers Andrew Marlowe And Rob Bowman
• CASTLE Goes Hollywood — “To Love And Die In L.A.” Spend Time With Cast And Crew As Castle And Beckett Take L.A. By Storm
• Murder Board 101 — Victims, Persons Of Interest, Evidence And Clues…Find Out What It Takes To Develop This “Character” Each Week
• Cast And Crew Commentary
• Music Video — “Get On The Floor”

If you are the fan of the show or are looking to catch up, then you need to pick this up.