Director Lars Von Trier has had a controversial career and a reputation as an egomaniacal iconoclast. He was part of the influential Dogme 95 collective – filmmakers who pushed a new cinematic realism by setting-up a series of rules one must follow when making a film. Von Trier has since violated every single one of the collective’s rules. Von Trier has been accused of torturing his actors, barbarism, animal cruelty, misogyny and, of late, Nazism. His reputation for being difficult to work with, when paired with his reputation for making brilliant cinema, generates headlines and controversy for all of his films – his most recent, Melancholia, being no exception given his odd comments about Hitler during a recent press junket.

Melancholia opens with a series of bizarre, disturbing images akin to slow motion snow globes or animated postcards. We see a mother clinging desperately to her child amidst a hailstorm, a woman closing her eyes as the corpses of dead sparrows rain down around her, a horse collapsing onto a field at dusk and then the apocalypse as, from space, the Earth collides with another much larger planet. There is a sense of creeping doom and tragedy to all of these scenes but, more than this, an undeniable beauty.  Melancholia is director Lars Von Trier’s first film in a long while to emphasize the beautiful above the tragic and the result is a gorgeous picture of the end of the world.

Melancholia deals with two sisters – Justine and Claire. We meet Justine, Kirsten Dunst’s character, on her wedding day. Justine and her husband Michael are driving to their wedding reception. The couple seems very much in love and as they arrive at the palatial estate where the reception is being held the film has a fairytale quality to it. However as the night’s festivities commence it becomes clear there is a growing disharmony within the wedding party. Justine’s divorced parents bitterly argue during the bridal toast and suddenly Justine begins withering to the point that she sinks into a deep depression. The result is the collapse of her wedding, marriage and life. The wedding reception is being held in the home/business of Justine’s sister, Claire (Charlotte Gainsbourg) and her husband John. The couple’s home also serves as a resort with an 18-hole golf course, serving staff and dozens of rooms. John, played by the always intense Kiefer Sutherland, is a man whose pride is wrapped-up in his business, his perceived generosity and his ego. John spends much of his time letting Claire know that her family is insane and a financial burden on him. John also constantly lords-over Justine, who he perceives as weak and crazy, the amount of money he spent on her wedding. John seems to fear the similarities that Claire and Justine share with their mother, a woman whose anti-marriage, apocalyptic ranting started the turmoil at Justine’s reception, embarrassing John deeply. 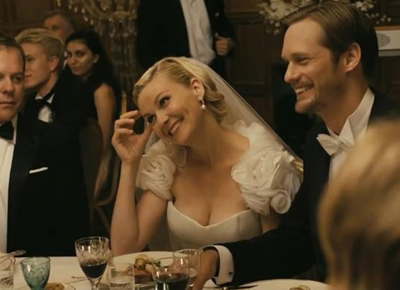 Despite all the interpersonal difficulties, every character in the film seems universally fascinated with astronomy and as the story progresses we learn there is an impending astronomical event in which another, much larger, planet is going to pass near the Earth. The planet was hiding from view behind a red star and has suddenly revealed itself upon its approach. It is the characters’ awareness of this impending celestial event that dictates their actions and moods – for Justine she initially collapses into a crushing depression. For Claire there is a growing panic as the larger planet, known as ‘Melancholia,’ draws closer to the Earth. Kirsten Dunst gives her first truly superb performance as a woman who knows the end is nigh and learns to accept it. Gainsbourg’s masterful ability to slowly come unhinged was the key to Von Trier’s last film Antichrist and while her work here is more subtle it is no less moving. For his part Von Trier devotes his normally quite sadistic creativity into making each scene absolutely gorgeous – from the deep green of the golf course’s grass and trees to the massive blue planetary brilliance of Melancholia; all of it would be so picture perfect if it wasn’t all so sad.

Ultimately Melancholia is a film about couples; the way they are drawn together only to be destroyed: Justine and Michael, Claire and John, Justine and Claire, Earth and Melancholia. After the infanticidal, genital-cutting horror of Antichrist, this film seems to be Lars Von Trier’s shot at redemption. There is no inherent controversy in Melancholia – only a deep inevitable sadness that, like the planet, grows and grows so that by the end of the film it is all consuming. There will be some who write the film off as pretentious or focus on Von Trier’s ridiculous Nazi comments during its Cannes premiere. That would be missing the point. With an ego the size of Von Trier’s pretention and controversy are as inevitable as Earth’s collision with Melancholia. If one is able to step back from those distractions Melancholia is a gorgeous cinematic experience and unlike Antichrist you won’t want to look away – even as the world ends.

Melancholia is available on VOD now and in limited theaters on November 18th.