Tower Heist, which opens this weekend in theaters, is an entertaining film that hits its stride about 20 minutes in and shortly thereafter turns on the cinematic cruise control. There is nothing inherently bad about the film, save for its ridiculous finale, but Tower Heist ultimately amounts to barely more than squandered potential. The main draw of Tower Heist is quality work by its cast: Ben Stiller, Eddie Murphy, and Matthew Broderick with a truly standout performance by Tea Leoni. The script has a witty edge without needing to resort to vulgarity, and obviously the plot, based on the Madhoff scandal, is timely. Unfortunately, where Tower Heist falls short is in its execution or, better yet, executioner – directorial hack, Brett Ratner.

Like all Brett Ratner films, Tower Heist is high on concept. In the past Ratner took on Marvel’s mutants in X3: The Last Stand, Hannibal Lecter in Red Dragon and made Jackie Chan a household name via his Rush Hour films. All of those movies tell epic tales featuring international locales, over-the-top heroes & villains, and are packed with enough violence and explosions to distract audiences from their complete lack of substance. Any questions about Tower Heist’s substance can be answered in its climax, featuring a high-flying robbery in an NYC penthouse as the Macy’s Thanksgiving Day Parade balloons float by.

At first blush, Tower Heist seems to be Ratner’s attempt at substance – being a character driven, political comedy with a little bit of Ocean’s 11 thrown in for good measure. Ratner has a knack for picking great casts and Tower Heist is no exception. Alan Alda plays Arthur Shaw, a Bernie Madhoff-esque investment broker who everyone implicitly trusts because he comes across as a kindly grandfather figure. Shaw is beloved by the staff of the building he lives in, known as The Tower.  The building is run by an unusually understated Ben Stiller playing The Tower’s manager, Josh Kovacs. When it is revealed that Shaw is actually a greedy con-man, who has stolen The Tower staff’s entire pension fund, Josh assembles an incredibly rag-tag team to get back their money stashed somewhere in Shaw’s penthouse. Kovac’s inept gang of thieves includes Eddie Murphy as thief, Matthew Broderick as an unemployed stock broker, Michael Pena as an elevator operator and Tea Leoni as the world-weary FBI agent assigned to Shaw’s case. The rest of the cast is also stellar (save for Gabby Sidibe’s Jamaican patois) as the working class victims of corporate greed. Unfortunately this is where the compliments about Tower Heist end. 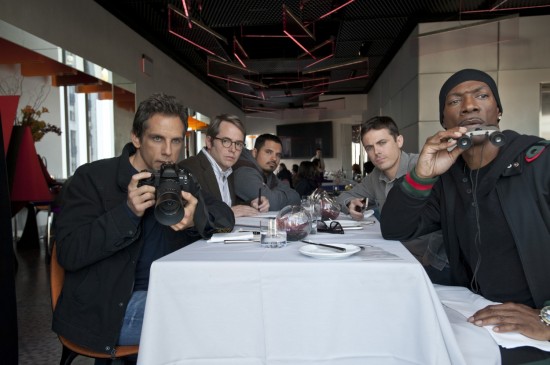 The problem with Brett Ratner’s direction is laziness. Most of his outdoor scenes are clearly shot on sound stages –something a good director would mask. He also doesn’t understand character development, so instead, he uses large casts of good actors and loads of over-the-top action as a means of glossing over the underdevelopment. Ratner’s biggest lazy downfall though is his tendency to allow his films to devolve into mindless action set pieces – which may work when Jackie Chan is the lead, but not so much with Ben Stiller. Without spoiling Tower Heist’s finale, there is definitely an ever-increasing level of stupidity injected into the film that coincides with an increase in its action. By the time viewers are offered a bird’s-eye view of the parade float, through the windshield of a car, the film has dissolved into a messy pile of ridiculous action clichés and impossible physics that serve to belittle its original message about working America’s plight amidst unchecked corporate greed. In the end, Tower Heist is merely a fun, fluffy, and forgettable movie that could have been so much more.