This Friday, Relativity Media’s Immortals opens in theaters in 3D. The film, directed by Tarsem Singh (The Cell), is an action period epic about the war between the Greek Gods and the Titans. The solid cast includes future Superman Henry Cavill, Luke Evans, Freida Pinto, and Mickey Rourke, and the producers made the popular (and similar-looking) 300. So, does the film live up to its names? Find out after the break.

Immortals is based (very) loosely on the Greek myths of Theseus and the Minotaur, as well as the Titanomachy. There was a war between generations of Greek Gods, with the losers (the elders) renamed Titans and locked away in a mountain. Now, King Hyperion (Rourke) looks to seek revenge on the Gods by releasing the Titans. Unfortunately, Zeus (Evans) has made a rule that the Gods are not to interfere with mankind, so they cannot stop Hyperion from taking over Greece and releasing the Titans. They must rely on Theseus (Cavill), a peasant that Zeus (in human form, played by John Hurt) has trained for this fight since Theseus was a child. Thus begins the epic journey of Theseus to get the Epirus Bow, the most powerful weapon on Earth, and stop Hyperion. Along the way, he is joined by several slaves (including Stephen Dorff as Stavos) and Phaedra (Pinto), an oracle.

As you can tell, the plot is a bit complex, which is a nice change of pace for this subgenre of action epics. Although I found the story and the parallels to modern religion very interesting, some of the finer points are not explained very well. Hyperion’s drive to release the Titans seems like a bit overreaction to the reason he gives, but apparently I missed the part that explained that Hyperion is actually a Titan in human form (according to online synopses and the original myth). I felt like the writers went through the trouble of creating a rich storyline and background but forgot to put it all on page. Similarly, some things were explained too late for me, such as why Theseus and his mother were so hated by their community. In another film, this might have been a nice reveal, but here it was just frustrating to not understand. 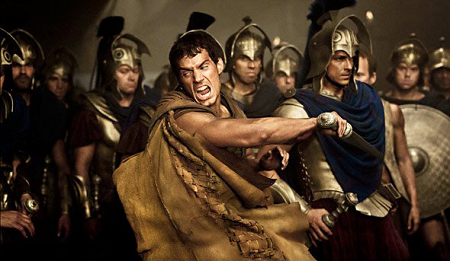 However, the visuals are what you are paying $12 or more dollars to see, so in that regard, you will not be disappointed. The cinematography is not quite as stylized as 300, and the sets are quite believable. The fight choreography is impressive and brutal, so get ready to see a lot of bodies split in half. Fortunately, the stylization mutes the gory effects a bit. Unfortunately (though not surprisingly) the 3D effect didn’t add much, so I wouldn’t recommend shelling out the extra bucks.

How does the Man of Steel fair in his first leading role? Cavill plays Theseus with the appropriate rage and earnest needed, but I didn’t feel anything deep about his performance. The same goes for everyone, even Rourke, who slid into the character pretty comfortably, but didn’t seem to add anything to what was possibly a very complex character. I wanted to care more about what happened to these people, but there was nothing to make me do so.

Overall, I left Immortals feeling strangely unsatisfied. The story the filmmakers tried to tell was compelling, and the cinematography and special effects were both impressive and a good mix of realism and stylization. Unfortunately, these attributes were offset by the way the story unfolded and the mediocre performances. However, the film is a pretty fun ride, and it usually has a good pace.