Currently in limited theatrical release, and VOD, Tucker & Dale vs. Evil packs a lot of substance into its 90-minute runtime.  Tucker & Dale is a buddy comedy, a deconstruction of the redneck horror subgenre, a bloody gore fest and reverent homage to horror classics like The Evil Dead and The Texas Chainsaw Massacre. First-time director, Eli Craig, deftly sets-up scene-after-scene of hilarious miscommunication, played out to the extreme, between a group of violent college kids and a pair of affable rednecks. But what truly makes Tucker & Dale so enjoyable is the chemistry between the film’s two leads, Tyler Labine and Alan Tudyk, whose rapport is reminiscent of Shaun of the Dead’s Simon Pegg and Nick Frost.

Tucker & Dale’s plot begins where so many clichéd horror films do – in a speeding vehicle, filled with young, dumb college kids, driving into the woods. The great thing about the scene is there are nine kids stuffed into the vehicle and the effect is similar to a clown car – packed with inebriated students heading off to their doom.  While stopping for beer, the students encounter Tucker and Dale, two greasy-looking rednecks driving a rust-bucket truck loaded-up with sharp metal tools. The kids instantly assume Tucker and Dale are trouble based upon their stereotypical appearances and also, in part, due a brief babbling encounter with Labine’s, socially awkward, Dale. Foregoing communication, the kids drive away from Tucker and Dale. They proceed to spend the rest of the film either fleeing or attacking the duo – which would make complete sense in a traditional horror film. Tucker & Dale vs. Evil is NOT a traditional horror film.

It is revealed that Tucker and Dale are not hick psycho killers and are, in fact, quite decent and introspective gentlemen on their way to a quite weekend of fishing at Tucker’s recently purchased cabin. Tucker’s cabin, which he dubs his “vacation home,” is actually quite similar in appearance to the cabin from The Evil Dead series. The cabin’s interior seems to have been designed by the same bone-loving freak who feng shui’d Leatherface’s house. After settling-in, Tucker and Dale go night fishing and again run into the students who are now skinny dipping. Through a series of amusing turns Allie, one of the coeds, (played by 30 Rock’s gorgeous Katrina Bowden) ends up getting rescued from drowning by Dale. She is brought back to the cabin, unconscious, while her friends think she was kidnapped and eaten by the rednecks. Allie awakes safely in the morning to Dale, bringing her breakfast in bed, quite bashfully. 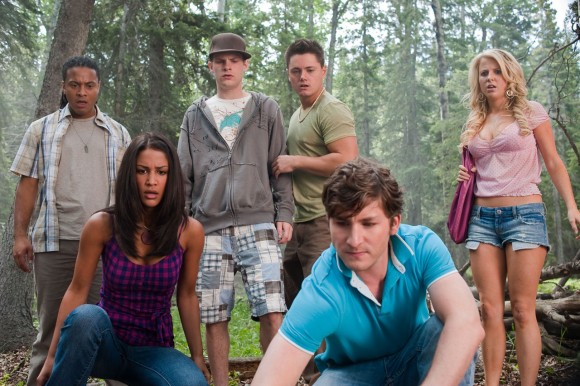 To reveal too much more of the film in detail would be wrong, but the result of the misunderstanding over Allie’s rescue is that the kids plot to violently attack Tucker and Dale who they deem to be “evil.” Tucker, Dale and Allie are all completely unaware of the students’ impending assault. In fact the only attempt at communication between the two parties resulted in everyone running away confused into the woods. Unfortunately the students are clumsy and their repeated attacks on Tucker and Dale end-up backfiring… fatally backfiring. In one memorable sequence that nods to Fargo, one of the kids tries to stab an oblivious Tucker as he does yard work with a massive wood chipper. The student runs, trips and then falls, face first, into the shredder while a clearly traumatized and baffled Tucker tries to pull the kid out. The repeated “accidental suicide” motif may sound one-note or unsustainable but, incredibly, it mostly works. The film succeeds because nothing feels repeated or illogical within the world of the film. Plus the grisly, and slapstick, ways people die in Tucker & Dale are so over-the-top they become hilarious.

As stated earlier, the main reason for the film’s success and appeal is wrapped-up in its two stars. Alan Tudyk, who many readers will know as Wash from Joss Whedon’s Firefly series, has a rare charisma that makes him silly, lovable and completely believable in nearly any role. In Tucker & Dale he is a good foil to Tyler Labine who plays Dale goofier and more insecure than Tudyk’s Tucker. What draws the Pegg/Frost comparison though, comedy-horror aside, is the natural rapport the actors have with one another. Tucker and Dale share deep friendship which helps them both to maintain a kind of sweet innocence that carries them through the film’s bloody gauntlet. Viewers will be treated to the same kind of amusing levity, amidst the gore, as was present in Shaun of the Dead because the actors so clearly enjoy working with one another. Near the film’s finale, Tucker and Dale talk confidence. Tucker tells Dale confidence is the only thing he lacks and that he is a smarter, stronger, better man than he realizes. Viewers will surely be feeling the same way about the film – Tucker & Dale vs. Evil is a stronger, smarter and better film than they had ever expected it to be.