I love the Muppets. I thought I should get that out of the way. The original The Muppet Movie is one of my favorite movies of all time, and by watching it again a few years ago, I gained a new appreciation for the Muppet universe as an adult. After some time away from the limelight, the Muppets are back in a new movie, appropriately titled The Muppets, that opens in theaters on Wednesday. Does it live up to the original? Find out in my review after the break.

What makes the Muppets so special is how real the characters seem, as well as the special brand of pun-filled humor that often brokes the fourth wall. The first few Muppet movies and The Muppet Show encapsulated these features, but later projects (especially under new owner Disney) seemed to forget what the Muppets were all about.

Writer and co-star Jason Segel looks to bring that original spark back in this film, which has Kermit and new Muppet Walter trying to get the gang back together. Segel plays Walter’s brother Gary, who has looked out for Walter since they were kids. Walter is invited to tag along on Gary and Mary’s (Amy Adams) anniversary trip to Los Angeles, where he hopes to finally meet the Muppets, who he grew up idolizing. Unfortunately, the Muppets have separated since doing The Muppet Show, and owner Tex Richman (Chris Cooper) is looking to demolish the Muppet Theater. The only way to stop him is to raise $10 million, and Walter decides to convince the Muppets to get back together for a telethon. 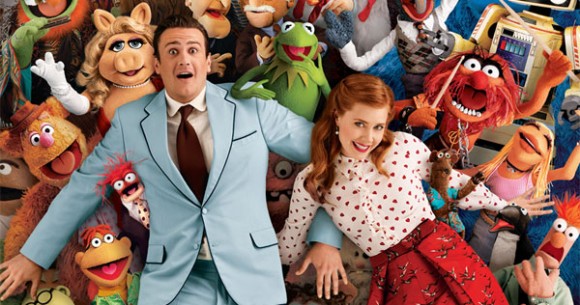 This “getting the gang back together” concept works really well and appropriately mirrors the events of The Muppet Movie, which showed how the Muppets first met. I like that the film has the Muppet Show (and presumably The Muppet Movie) being part of canon, as it lets us soak in the nostalgia. A major question brought up by the film is whether or not the public has forgotten about the Muppets, which could easily be inferred to be a comment on The Muppets in the real world. With the mismanagement of the property and a more cynical populace, is there a place for The Muppets? I think the fact that the world is too cynical is exactly why The Muppets are needed now more than ever. They are a breath of fresh air that reminds us that the world can be a great and friendly place.

However, don’t think that this whiff of nostalgia covers up what would otherwise be a poor film. Segel and co-writer Nicholas Stoller really get these characters and their humor. Along with the clever nods to the original films and show, there are great musical numbers (which all Muppet movies should have), a clear but interesting plot, a surprising amount of honesty, and most importantly, heart. My only real issue with the film was seeing Segel play such an innocent and earnest character, but even if you don’t get over it (which I did), the Muppets are the real stars of the film.

If you missed the Muppets in their original Jim Henson-era glory, then you should definitely see this flick.

Bonus Points: In a screening full of cynical bloggers and journalists, I heard a quite a few bellowing laughs. For another great review of the film, check out Drew McWeeny’s lengthy assessment on HitFix.com.