My final class of the day let out at 12, just as the countdown ended. My phone and laptop were on their way to being dead and I had no life support. Luckily I was able to get to my university’s computer lab and continue watching the countdown page for DC to go live. I was constantly switching between tabs on the browser; Twitter to Unforum back to Twitter. DC finally went live around 1:30 or a little after. I clicked the link, which opened a PDF clue sheet. The snippet of the location pictured was very familiar; I knew where this was. I was 10 minutes away from the drop point.

I quickly logged out of the computer, picked up the papers from the printer and sprinted out to the streets of DC. I caught the first bus I saw, nearly getting hit by two cars in the process, as I had to cross the street. I rode the bus for a few blocks and hopped on the Metro, which would get me to the drop point a lot faster.

When I exited the subway, I sprinted down 7th Street, weaving and bobbing through the crowd with agility. When I got to the Smithsonian American Art Museum, I knew that I was looking for a disabled parking sign on a corner next to a left turn only lane. Little did I know, I was on the wrong side of the building. I ran, checking around every disabled sign. My heart racing, I studied the picture again and noticed that I needed to be near a grassy slope. I happened to see a security guard walking toward me and he stuck his hand into a gate, I thought he had found whatever I was looking for. Turns out he was just checking a lock.

I approached and asked him if he recognized the icefly symbol on the clue sheet. He didn’t. I then asked him if I was at 611 7th street. He said I wasn’t (but I was). I said thanks, and darted up the street, only to find the slope and sign I was looking for.

Looking around to see if the object I was looking for was laying on the ground or attached to the fence surrounding the building, I decided to check the disabled sign. The sign itself was sitting off of the fence so I slipped my hand behind it. The envelope was hidden, attached to the back of the sign. I pulled it off and held it in my hand for a few moments. This was it; I was so close.

I proceeded to open it, trying to look like a spy. I followed the instructions on the paper inside. I texted the password to the number provided and waited. I then looked across the street and noticed a man standing looking down at what I thought was a small video camera. I then realized that it was an iPhone. Was this the representative the Human Preservation Project sent to rendezvous with me? The text first text came in, asking me to identify myself. I replied with my username to log into the Survival Code site. What seemed like hours passed by and the second text came in, directing me to the Museum of Crime and Punishment, which was adjacent to the location of the envelope.

Crossing the street, I had a good look at the mystery man with the iPhone. It was cold that day and his jacket was zipped up tight. I thought the person who would be meeting me would be wearing a HPP t-shirt or something. I guess they aren’t doing that this time, I thought to myself.

When inside, I saw the box. A lady at the front desk looked up at me and asked, “Are you the person? The scavenger hunt or whatever?” I replied, “Yes”. She giggled and picked up a walkie-talkie “George, he’s here. The scavenger hunt person.” Then to my surprise, the iPhone man from across the street entered (It was a total Slugworth moment) and said, “This is what you’re looking for bud.” I knew what I was looking for, but I didn’t want to look like I knew what I was doing.

I pulled the envelope from my pocket and freed the key from the tape. The sound of the key penetrating the lock, resounding through the acoustics of the wooden box was mesmerizing. The lock popped as George (I guess he was a curator), entered the room along with a security guard. I pulled the icefly from the box and unsheathed it from the black cloth surrounding it to “ooos” and “aahs”. It was mine and I couldn’t believe it.

I had one last task to complete before I could leave. I pulled out my phone and sent a text message:

“I have the package”

“Congratulations from the Human Preservation Project.”

The ride home was challenging as the box was kinda heavy and I had to take the Metro, DC’s subway system. Surprisingly, station managers or Metro police didn’t stop me because the box was very suspicious looking. However I did get some looks, mostly curiosity (I think).

I’ve been playing ARGs since 2008 and this is the most rewarding experience I’ve ever had playing one. The feeling of accomplishment and the sheer joy is just priceless. 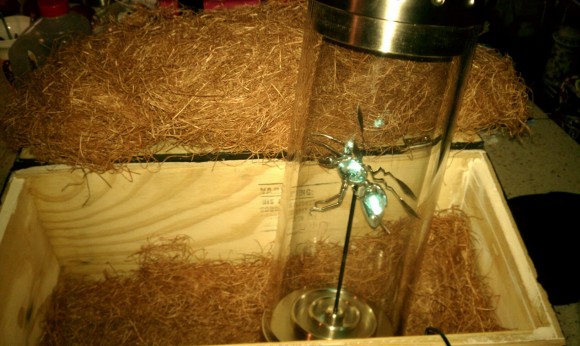