Martin Scorsese’s latest film Hugo, which opened yesterday in theaters, is indeed a “family film”, but do not let that dissuade you from seeing this amazing work from, arguably, our greatest living director. The movie tells the story of a young orphan who lives in the walls of a 1930’s Paris train station, repairing the station’s clocks and hiding from the cruel station master. The boy attempts to make sense of his father’s death through some puzzling clues and his journey begins a series of events that end up changing the course of film history. Ultimately Hugo is a story about a boy seeking his purpose in life and who, throughout his quest, helps others find their purposes too.  What Scorsese has done with Hugo though is so much more than a mere rags-to-riches tale. Hugo is Martin Scorsese’s love letter to the cinema, to his own children and to the work of early cinematic pioneer George Méliès.

The first thing to discuss about Hugo is the use of 3-D. There has never been a wide-release film, maybe save for Avatar, which makes better use of 3-D technology than Hugo. The film is based on a unique book (The Invention of Hugo Cabret) that is parts pop-up book, graphic novel and traditional young adult fiction. In order to depict the book’s visual aesthetic, Scorsese decided to use 3-D for the first time in his career. The result is a colorful, gorgeous spectacle utilizing the extra dimension to add layers to the film’s already lush images – as opposed to presenting viewers with cheap CGI parlor tricks and effects shots. Young Hugo Cabret lives in an enormous train station and the 3-D elements make the machinery, steam and clocks surrounding him come to life beyond that of a normal theatrical experience. If there was ever a film worth the price of a 3-D screening it is Hugo.

The 3-D aside, Hugo is really carried by its stars: Asa Butterfield as the determined Hugo, the always entertaining Chloe Moretz as Hugo’s cohort and Ben Kingsley as a brilliant man who has been worn down by life. Kingsley’s work as George Méliès required a performance of remarkable range. Kingsley flawlessly plays Méliès, over the course of decades, beginning as an idealistic young auteur, a villainous curmudgeon and finally as a frail genius on the verge of collapse. Hugo’s three leads portray characters that have all lost someone or something dear to them and it derailed their lives – in a train station of all places. Other cast members include Sacha Baron Cohen as a malevolent Inspector Clouseau-type hunting Hugo to send him to an orphanage and Helen McCrory as Méliès’ wife and protector. Everyone in Hugo is in top form and there are a number of cameos peppered throughout for watchful viewers to find and to treasure.  That said the film’s real goldmine is found in the clips of classic Méliès films which still have the power to amaze more than 100 years after their inception. 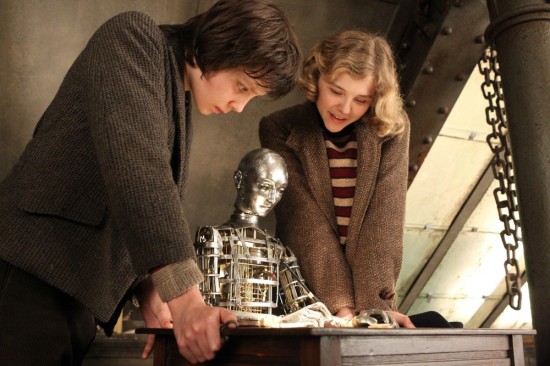 George Méliès’ films are iconic, one of the most famous being 1902’s A Trip to the Moon in which a rocket shot from Earth crashes into the face of the Man on the Moon. Méliès’ use of effects and editing allowed the moon to wince, blinks and leak a fluid as a result of having a rocket lodged in its eye. There are dozens of Méliès films still in print and Scorsese pays homage to all of them with Hugo as inspiration to not only his own work but as the clear root of so many cinematic visions. The aim of Hugo is to highlight the need to preserve and treasure classic movies like Méliès’. Scenes of the destruction of Méliès’ work, when combined with descriptions of decaying celluloid, are on-par with the death of a loved one in Hugo and for the director this is not hyperbole. When he isn’t directing, Martin Scorsese works with a not-for-profit restoring and preserving classic films. The director’s passion for preservation is evident throughout Hugo and the film will likely win Scorsese many new donors and supporters to his cause. In one of Hugo’s best scenes, a young George Méliès points out to a child that the cinema is where dreams are made. Like the works of George Méliès, Martin Scorsese’ Hugo is a beautifully constructed dream worth watching again and again.