Fox Searchlight’s Another Earth comes out on Blu-Ray and DVD today, and since the film only had a very limited theatrical release this summer, this may be the first opportunity for many to see the sci-fi drama. Is the film worth picking up at your local Blockbuster (this is 1998, right?), or is the premise too good to be true for an indie flick? Find out after the break.

The film, set in the New Haven area, revolves around Rhoda Williams (Brit Marling), who at 17 decided to drive drunk after celebrating getting into MIT. She hears on the radio about the discovery of a new planet in the solar system that can support life. While trying to see it from her car, she loses control and hits another car head on. The driver, John Burroughs (William Mapother), ends up in a coma, and his wife and son are instantly killed. Four years later Rhoda is paroled from jail and takes a job as a high school janitor. She goes to John’s house to apologize, but out of fear instead pretends to be a maid. For the next few weeks and months she cleans his house and gets to know him. Just as their relationship begins to spark, she wins a contest to visit the other planet, which is now easily visible in the night sky and seems to be an exact replica of Earth.

I was immediately interested in the high concept gimmick at the center of this film – the idea of discovering another Earth that is exactly like our own. Unfortunately, if that is your reason for watching this, then I think you’ll be a bit disappointed, as it is simply a framework for the story that unfolds. The sci-fi aspect of the story is mostly pushed to the background save for the climax, so you’ll only get bits and pieces of information and visuals. The internal turmoil of Rhoda and her relationship with John is the film’s focus, and it develops very slowly. In fact, the overall pace of the film is best described as crawling, as almost every scene lingered too long for my taste. 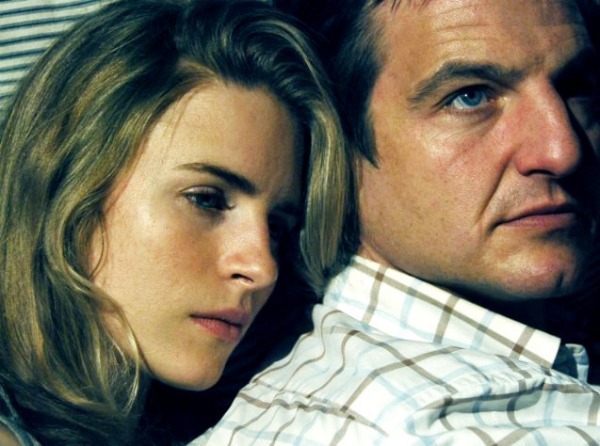 However, this methodical pace worked well for the development of the Rhoda and John’s relationship, which couldn’t be pushed too fast if the audience was to believe it at all. Marling and Mapother have a great, haunting chemistry. The film also had a solid ending full of twists that left the final moment open to interpretation. The scenes we did get about “Earth 2” (as the media outlets in the filmed dubbed it) were fascinating, and we often got to see visually stunning shots of Earth 2 (and Moon 2) in the sky looking as big as our Moon. When you take into consideration that this film was made on a shoestring budget, it is overall rather impressive.

The Blu-ray/DVD unfortunately has very little extras for a film with this topic and interesting production story. There is some key information left out of the film about how Earth 2 came into existent (or at least into our dimension) and why it seems to be getting closer to our planet as time goes on. These issues are never even brought up in the film nor any of the five featurettes that are only a few minutes long, even though one of these featurettes is even titled “The Science Behind Another Earth”. The higher quality of the Blu-ray may not even be necessary since the film has a gritty cinematography that can’t be enhanced much.