Earlier this week, two mysterious CIA documents were “leaked” online. It was quickly revealed that these had something to do with The Dark Knight Rises. A third document, tweeted out yesterday by The Fire Rises, mentioned a black ops mission called “Operation Early Bird”. This lead to the discovery of a website and a countdown, which ended today. So what exactly is Operation Early Bird? Hit the jump to find out.

When the countdown clock hit zero, a blank map appeared at the Operation Early Bird website. Below the map you can enter coordinates. But there were no hints as to where to find the coordinates or what would happen when entered.

Several people found that if you head over to the film’s official website, an audio clip plays which gives out coordinates to enter at the Operation Early Bird site. Once entered, a location on the map is covered with a little green dot. From there, you can go to Gofobo to reserve passes for an “early” (it’s at 10 PM) screening of the opening sequence of The Dark Knight Rises next Tuesday, December 13th. 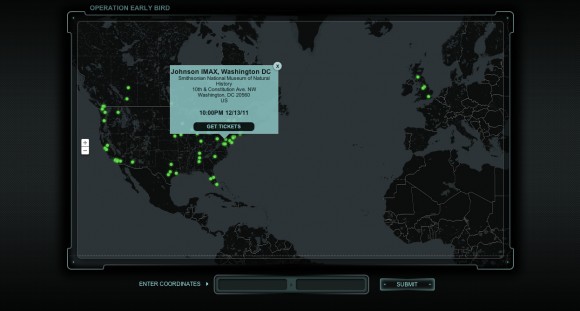 This event follows a press screening held last night at Universal Studios: Hollywood, where director Christopher Nolan introduced the sequence. Next week’s event also gives more people a chance to see the footage since it is only playing before Mission: Impossible-Ghost Protocol at 42 IMAX theaters across the U.S., Canada and the U.K.