The sci-fi action thriller In Time is out on DVD and Blu-Ray today. If you missed the ageless cast, which includes Justin Timberlake and Amanda Seyfried, in theaters, read my full review of the film and its home release after the break.

In Time is set in a world where people are genetically altered so that they don’t age past 25. The only problem is, once you hit 25, you only get one year to live. If you want more time, you have to earn it. In this world, time literally is money. Timberlake plays Will Salas, a factory worker living in an inpoverished town with his mother, played by Olivia Wilde. When he saves a wealthy man (Matt Bomer) at a bar from some thugs, the man tells him how the rich control the flow of years by changing cost of living and such. Not everyone can live forever, and the rich make sure of it. The man decides he doesn’t want to live anymore (he’s 105), so he gives Salas all his years (over a century) and commits suicide. Salas goes on the run when the police, lead by a tenacious Raymond Leon (Cillian Murphy), believe he is to blame for the death.

Now knowing that the system is rigged, Salas goes to the wealthy part of town in order to clean their clocks (pun intended). He takes Sylvia Weis (Amanda Seyfried), daughter of bank owner Philippe Weis, hostage when the cops find him. She falls for Salas and understands the corruption going on around her, so the two become sort of a Robin Hood/Bonnie and Clyde hybrid in their attempts to steal time and give it away. 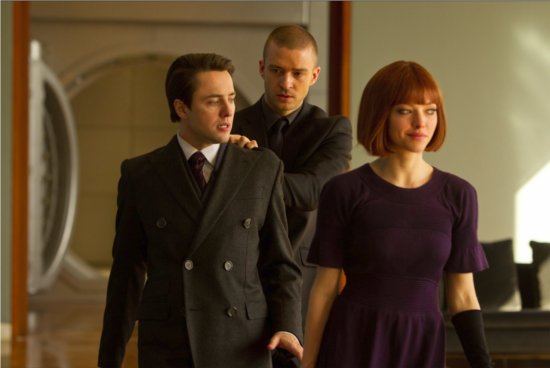 The concept of this film is pretty interesting. The idea that you spend time as money has a lot of fascinating side effects on culture, and the film touches on those effects pretty well. Unfortunately, there are some bigger themes that the film tries to thrust down our throats once in a while without really developing them. The logistics of how time is transferred looks good on screen, but it’s hard to imagine something as simple as holding a man’s arm a certain way could kill them and give you all their years. There has a to be a safer way to do this.

There are other plot holes in the film, and all together there is not a very good flow. I didn’t feel any driving force keeping the story moving forward, so it felt a bit haphazard. The characters are pretty decent, though it’s hard to believe a factory worker like Salas could pull off some of the badass action movies that Timberlake did. Timberlake in general isn’t a great action star, and I feel like he is better suited for comedy than anything serious.

The setting of the film has a visual style that is hard to pinpoint. Aside from the technology used for timekeeping and a few other tidbits, this film could take place in almost any decade. The cars are mostly from the 70s, and not a single person has a cell phone. I’m sure there’s an interesting backstory as to why its like this, but it’s never touched upon.

Overall, the premise of In Time is greater than the film itself. The fact that the film skims the surface of some great social status and class structure issues makes it a bit more frustrating. Lines like “For a few to be immortal, many must die” hint at a parity to current issues with Wall Street scandals and such, but that’s about it. Unfortunately, the DVD itself has a similar problem in that it could have dove into these issues, but instead we only get some deleted scenes.