Mark of the Spider-Man Viral Updates

If you’ve been following along, a twitter account for the new The Amazing Spider-Man viral campaign, Mark of the Spider-Man, was created and sent out coordinates for several U.S. cities late last week. Following the coordinates, players found Peter Parker’s backpack full of different items, including running shoes and the clue that would lead them to a countdown. The countdown ended today and in 6 cities across the country, players were sent on a hunt. What they found may surprise you…or not. Find out more after the break!

When the countdowns began to hit zero this morning, the Mark of the Spider-Man page was updated with this message:

So, you’ve found us.

If you support us, if you support Spider-Man, now is your time. Follow the Twitter accounts of our operatives in each of these cities. They’ll tell you where to go to uncover the next step. For this pursuit we ask that you please be over the age of 18. Be safe, and good luck. We’re counting on you.

Several Twitter accounts appeared, one for each city. New York was up first this morning, and clues were quickly sent out via @NYCWebSlinger. The players were all supposed to meet a representative at unspecified locations and give a password. They were then given instructions to go to another location to receive their assignment and in each city there were 5 assignments. After the first assignment was completed in every city, a second password and assignment were activated and this continued until all 5 were done. 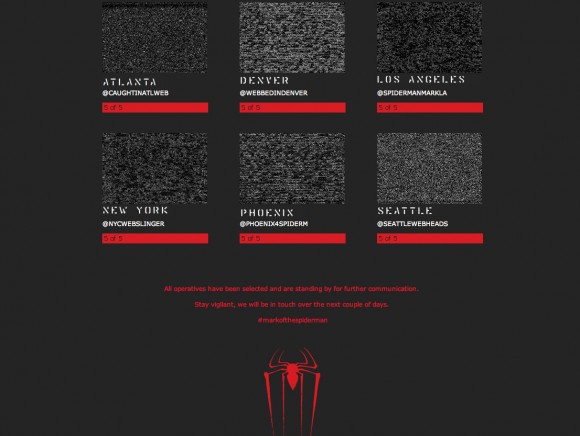 Players received packages containing “For Your Eyes Only” instructions, a cellphone and two black sweatshirts with a red Spider-Man symbol on the front. Thanks to a pic posted by @Slashfilm, we got a glimpse at the top-secret instructions given and the other items in the packages:

Keep this cell phone fully charged and within reach at all times. We’ll be contacting you with further instructions.In the meantime, find a friend you can trust. We need you both, remember, you must be 18 or older.And keep a handle on the hoodies, you’ll be needing them. Every hero needs a neighbourhood. We are the neighborhood. Show your support. 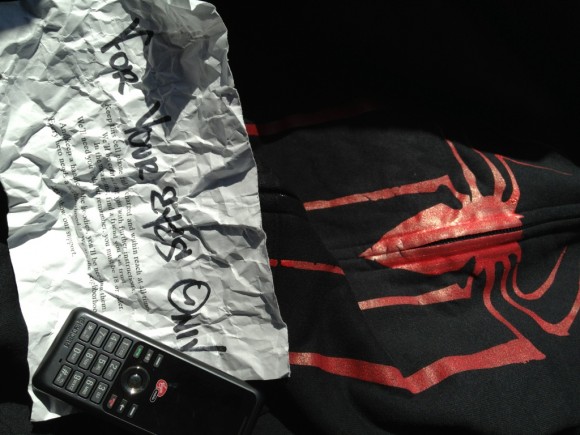 Once all 30 packages were claimed, the main Mark of the Spider-Man site was updated again with the following message:

All operatives have been selected and are standing by for further communication. Stay vigilant, we will be in touch over the next couple of days.

Thanks to Anton Volkov and his Tumblr page dedicated to this viral, we have learned that at least one player in Atlanta, has received a call from the Mark of the Spider-Man team, telling him to “be prepared” because something is happening tomorrow night. 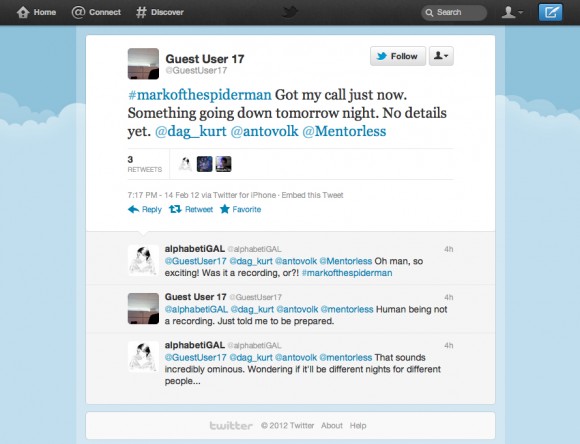 It is unknown at this time whether other “Spider-Operatives” got a similar phone call, but we’ll continue to keep you updated on this very exciting viral experience. Personally, it reminds me of the Citizens for Batman campaign from the massive viral for The Dark Knight.