Back in November, we told you about the beginning of a viral campaign for the upcoming sci-fi adventure comedy Men in Black III. There hadn’t been much movement, unfortunately, until today, when we got a new activity that should remind you of District 9. Details after the break.

The viral website TheMenInBlackSuitsAreReal.com and associated Facebook page are run by a 14-year-old kid with the handle “BugEyes126”. BugEyes thinks there are aliens on Earth and that men in black suits go around covering it up.

Comingsoon.net reports on a poster for Men in Black that features a phone number, 1-888-202-9797. It turns out that it’s the Men in Black Suits Hotline, and it is hosted by BugEyes, as the poster suggests. There’s a few menu options, but they only new information is that there is an alien named Clive that may become part of the narrative soon. 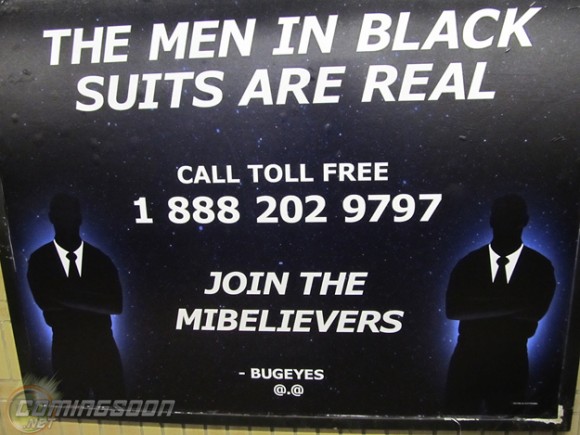 The most interesting thing to me is the option to leave a message about your own sightings of the MIB. This is very reminiscent of the part of the District 9 viral campaign that had people call and leave a message if they saw a “Non-Human”. These messages were put onto a Community Watch map. The similarity isn’t coincidental, since both films were made by Sony-owned studios.

BugEyes posted a YouTube video yesterday for his “MIBelievers” implying that there is more to come. Check out the video below, and subscribe to his channel to see new videos as they come out.