As was to be be expected, the viral campaign for Columbia Pictures’ The Amazing Spider-Man picked up some steam at WonderCon this weekend. In conjunction with Sony’s panel yesterday afternoon, there were a few updates to the campaign. Get the details after the break.

Down the street from the Anaheim Convention Center (the temporary location for WonderCon this year), Daily Bugle vans were handing out Wanted posters for Spidey. Of course, the Daily Bugle is the fictional newspaper featured in the Spider-Man universe, and they often have a negative spin on the superhero. 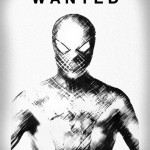 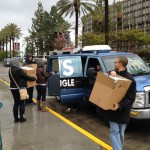 The posters have a link to a new viral website, WebbedMenace.com, which is dedicated to finding the vigilante Spider-Man and bringing him to justice. The site even has a video from The Daily Bugle that references the Mark of the Spider-Man tagging event by making it part of the story. Captain George Stacy (played by Dennis Leary) is interviewed about Spider-Man, and it’s clear he thinks of him as just a criminal.

Stacy and the posters give out a hotline phone number you can call (877-651-8503) if you see Spider-Man or anything Spidey-related. You can also submit your photos of Spider-Man sightings to the website. The website has a Twitter account, so be sure to follow @WebbedMenace to get updates. You can follow @markofspiderman to get the opposing pro-Spider-Man side of things, but it looks like that part of the campaign is on hold for a while while the Webbed Menace component makes its own mark.

Sony seems to love this whole “call in with your sightings” concept, as they are also currently using it for Men in Black III, as well as previously for District 9.