After we got two new images for Ridley Scott’s Alien prequel Prometheus, the Weyland Industries website has been updated to include a page on Investor Information, and it is quite extensive. There is only a small section on Project Prometheus, which you can check out after the jump. 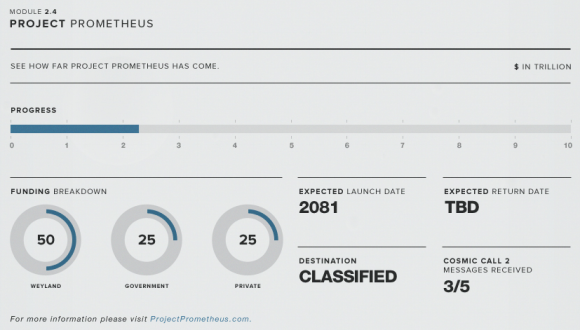 As you can see above, Project Prometheus is set to launch in 2081, which gives us a timeframe for the events in the movie. The report also references the Cosmic Call 2 used to find one of the movie stills on the Project Prometheus website. Cosmic Call 2 was the second wave of radio messages sent to various nearby stars in 2003 (the first wave was in 1999) from the Ukraine. Five stars were targeted in the constellations Cassiopeia, Orion, Cancer, Andromeda, and Ursa Major.

The arrival dates for these messages vary between 2036 and 2059. This is interesting because the website and report look to be set around 2073, by which time only one of the return transmissions could have been received (in 2069 from Cassiopeia). Yet, the report says that three out of the five Cosmic Call 2 messages have been received. How is that possible?

Just to fuel the conspiracy flames even more, 25% of the funding for the project is listed as “Private”, so could this be the Yutani Corporation that eventually merges with Weyland Industries in the Alien series?

I’m not sure if there are any more clues to the Prometheus viral campaign within the report, but check it out and let us know what you find! Prometheus opens in IMAX 3D on June 8th.