One would think with The Dark Knight Rises hitting theaters in a few months, DC Comics would pull out all the stops to capitalize on what is arguably the most anticipated film of all time. While Marvel was proudly pushing their film properties at their C2E2 booth by handing out Avengers posters and allowing fans to pose with a faux Captain America shield, the DC Comics area of the convention was almost void of a Dark Knight presence. Instead, the comic giant opted to focus on “Before Watchmen,” a series of prequel comics looking at the lives of the main Watchmen characters. It is a controversial endeavor, but nonetheless has the comic book world intrigued, and it had me intrigued for the way viral marketing is being used to promote it. Hit the jump to learn more.

Unfortunately, I wasn’t able to attend the DC All Access: “Before Watchmen” panel Saturday afternoon at C2E2, but Comic Book Resources has a great write up covering what the writers and artists present at the show had to say. If you are interested in the “Before Watchmen” comics coming out this summer, you should definitely check it out.

What caught me by surprise though walking the C2E2 floor was the realization that DC Comics has employed a viral marketing strategy to further hype the property. Handed out at the DC Comics booth throughout the day was a faux copy of the New Frontiersman, the fictional newspaper from the comics that pays special attention to the activity of the Watchmen.

I learned from others at the DC exhibit that the paper had an electronic version at NewFrontiersman.net. Interestingly, I discovered viewing the version online allows visitors to click on certain highlighted pieces of text and be treated to new content from the upcoming comics, including artwork, scripts, and a grainy but creepy picture of Rorschach. Hurm.

While this is not related to a film per se, MovieViral did cover the Watchmen viral activity that emerged prior to the film’s release in 2009. I give DC Comics credit for creating a viral marketing campaign for a series of comic books, and I get the feeling this campaign will become more comprehensive as the summer release for the books approaches.

You can view a couple pictures I took of the “Before Watchmen” presence at C2E2 below, along with a shot of the paper version of the New Frontiersman. Look for my C2E2 summary post tomorrow, filled with more pictures from the show and my thoughts on the convention as a whole. 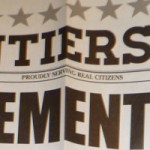 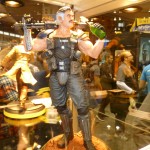 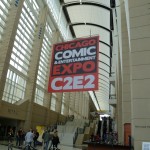 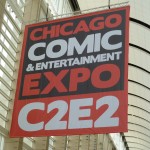 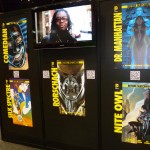 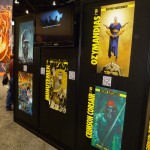 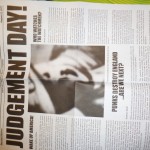 EVOLUTION OF THE BATMOBILE

EVOLUTION OF THE BATMOBILE