You can’t say we won’t be prepared when the zombie apocalypse hits. In recent months, we have reported on a number of immersive zombie-related activities for those interested, from a zombie camp in Oregon to a Dawn of the Dead-style simulation event in a shopping mall. Now, you can further test your zombie decision-making skills thanks to the new ZDAY Survival Simulator app that has just been released. Hit the jump for more details.

Developed by Mongadillo Studios Inc., the ZDAY Survival Simulator presents you with a series of scenarios you may very well find in the zombie apocalypse, and offers you choices on how to best handle it. The decisions you make will gradually lead to your fate, and offer plenty of opportunity to play again with a new approaches. I definitely get a Walking Dead-like vibe looking at the graphics and scenarios in the screen shots, which makes me think this app will be a big hit. 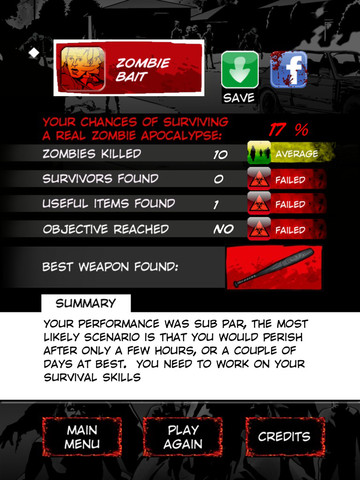 You can check out Mashable for more information on the game, or read the description of the game from its page in the iTunes App Store (where it is exclusively available) below:

What better way to survive a full blown apocalypse than to PRACTICE? This is not a traditional shooter or an arcade style game where you poke buttons to shoot digital bullets at virtual zombies. ZDAY is a 21st century text-based Simulator that puts you the player in tough, real-world situations and says “what would YOU do?”
Beautifully illustrated by renowned DC comics artist Matt Haley, ZDAY is an intelligent adventure game that starts you in a crowded suburb at ground zero of a full blown infection, and says “what would you do?” Faced with one scenario after another, the player has to make choices that will either lead him to escape the zombie-filled suburbs or perish like so many others. The sophisticated game engine keeps track of every decision that you make, and keeps a running tab on your survival probability based on the choices you make.
So keep your wits about you, and choose carefully, because one wrong move could have you facing a zombie horde or roving bands of trigger-happy looters.
The detailed results given after the player has completed the challenge provides very useful insight to what he may have done right and wrong. If the player wants to try again he can, and since the game engine reshuffles many of the exact events, ZDAY Survival Simulator is never exactly the same twice.

You can purchase ZDAY Survival Simulator for $1.99 in the Apple iTunes App Store.