The Cars franchise has made Disney billions in dollars between various revenue from the films themselves and merchandising. So, it must have been a no-brainer for the Mouse House to greenlight Cars Land as part of the $1.1 billion expansion to Disney California Adventure (DCA). How does the experience measure up? Read my review after the jump.

The Disney California Adventure Park has struggled since opening in 2001 as an extension to Disneyland in Anaheim, CA. The goal of the park is to celebrate California, and to give an experience that is similar to stepping inside a California postcard. Unfortunately, the more adult-themed park has had trouble finding an audience, so Disney has constantly added more features to appeal to families and fans of the brand.

How does Cars Land fit into this? In the first film of the franchise, rookie racecar Lightning McQueen is on his way to the Piston Cup tiebreaker at Los Angeles International Speedway. However, he gets lost and ends up in the small town of Radiator Springs on Route 66. Cars Land ia comprised of a impeccably accurate representation of Radiator Springs (given the space allocated), along with the stunning landscape of Ornament Valley Range. While the film never says what state the town belongs to – in fact, it’s probably in Arizona – Disney has taken some creative license in order to bring the Cars experience to their parks. It’s not a huge leap, either, as the Mojave Desert region has a culture that spans multiple states, including California.

As I alluded to before, the detail put into the town of Radiator Springs is simply amazing. I’m not even a huge Cars fan, but even I could appreciate the work that went into the exactness of the replication. The food is great as well, especially at The Cozy Cone food stands, where almost everything is a cone. The Ornament Valley Range is even more impressive. You see it right when you walk in to one of the area’s entrances, and it just blows you away. You can almost forget that you are in the middle of Anaheim.

I’m sure what people really care about are the rides. There are three attractions, and they are all worth trying out. Luigi’s Flying Tires is probably the least worth the wait. You sit on a giant hovercraft tire and bounce around rink, hitting other tires and trying to pick up giant beach balls to toss around. The ride is very hard to control, and you almost have to get out of your seat to even pick up any of the balls. Mater’s Junkyard Jamboree surprised me the most, as it seemed like a Mad Tea Party rip-off. You are in a cart being pulled by a baby tractor, but in fact you are whipped around. It was extremely fun, and a very different experience than the Mad Tea Party. 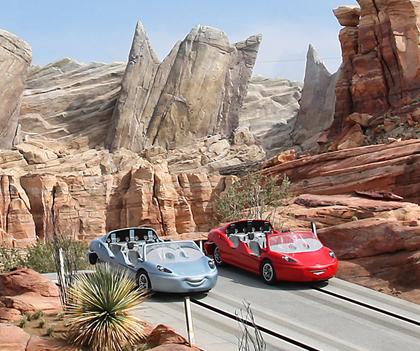 The big E-ticket ride that will surely have the longest lines is Radiator Springs Racers. Here is a description of the ride from Mouse Info:

The attraction begins in an attraction vehicle with an idyllic drive through the desert gone awry when the vehicle nearly runs into Mack the big-rig truck. As the vehicle swerves out of the way, it encounters the Sheriff who it appears is going to issue a speeding ticket but is impressed with the driving skills and invites the car to the big race! Before the race can begin, though, Mater has to take the vehicle for a round of tractor tipping. Unfortunately, Frank wakes up and chases the trespassers off of his farm.

On the way back in to town, the vehicle has to be prepared for the big race. At this point, the vehicle will either turn into Luigi’s Casa Della Tires for a tire change or into Ramone’s for a quick paint refresh. From there, the race begins through the remaining out-door portion of the attraction reaching the top speeds and coming to a photo-finish ending that will be different every time.

It’s great to get a close-up view of the Ornament Valley Range, and race itself is really fun, event if the results are random. There is a lot of detail in the cars you ride in and internal replica of the town. There’s even a hidden Mickey if you are clever enough to find it.

Overall, Cars Land is a great addition to the Disneyland parks. Everyone with a soul should be able to appreciate it, but fans of the Cars franchise will especially fall in love. Cars Land opens tomorrow, June 15th, and check out our Flickr for photos I took during the preview. 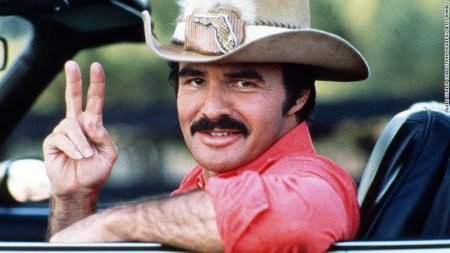