With the September 29th premiere of the CG-animated series “Teenage Mutant Ninja Turtles” fast approaching, Nickelodeon has decided that this week’s Comic Con be the best place and time to launch their new viral campaign. For details on the interactive game that puts you fighting with or against the turtles, click the jump, dude.

In what sound likes a fan boy dream, The Ninja Turtles have just put out the call and it’s your turn to answer.

Beginning today, July 12th, two separate street teams representing the ninja turtles and the foot clan will invade downtown San Diego and it’s International Airport in an effort to recruit fans to join either side, whether it be good or evil. Throughout the day, street art, banners, and flyers will try to further persuade passer-by’s to follow their destiny. Posted within the propoganda is a link to this mobile website where the participant can act out various missions. These missions award you with real-time achievements and rewards, with the possibility of even being on the receiving end of a phone call from Splinter or Shredder. (I’d prefer a b-o-o-t-y call from April O’Neal, myself)

Fans are also encouraged to visit the official ‘Turtles vs. Foot’-stamped truck in the Petco Park lot from today on through Saturday between 10am –7pm. Visitors that catch the truck will receive their physical badge of allegiance and either a Foot Clan or Turtles limited edition hat. If you see the truck and are awarded your hat, tweet it to us at @MovieViral with the hashtags #TVF and #MovieViralTakesSDCC. 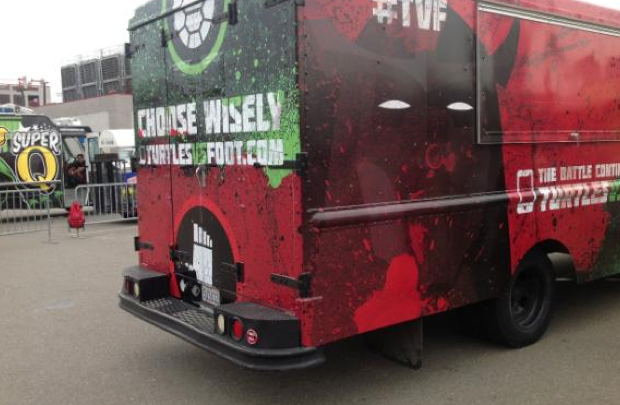 And if you thought it couldn’t get any cooler, Nickelodeon comes out of left field with another little spin: if you’re spotted wearing your hat elsewhere during the convention, then you qualify for a chance to win a Ninja Turtle-themed prize pack which includes assorted little collectibles and even a signed piece of old school memorabilia from TMNT co-creator, Kevin Eastman.

If you’re at SDCC, then I suggest checking this out while you can, and don’t forget to tweet us your photos with the two hashtags above.