Columbia Pictures’ action sci-fi Total Recall opened this weekend in theaters nationwide, and many are wondering if it will make you “recall” the original. Find out in my review after the break.

Based on the 1990 Arnold Schwarzenegger film of the same name, and thus also Philip K. Dick’s 1966 short story “We Can Remember It for You Wholesale”, Total Recall takes place in 2084 after World War III has made most of Earth inhabitable. The only two populated locations left are the United Federation of Britain, comprising of what is left of Western Europe, and The Colony in Australia. The two have been in a struggle for years, but a underground gravity elevator connects them. Doug Quaid (Colin Farrell) is a factory worker in the UFB, but lives the lowly Colony with his wife Lori (Kate Beckinsale). His job is in the assembly line making robot police officers, but he feels something missing in his life. So, he decides to get the spy package at Rekall, where they implant memories as a type of vacation. This is where everything goes wrong. Just as the procedure starts, police come busting in, and Quaid takes them all out without knowing how he did it. When he escapes back to his apartment, he finds that Lori is actually working for Cohaagen, Prime Minister of UFB (Bryan Cranston). Quaid goes on the run and unravels his past, as well as a major plot from the UFB.

When doing a remake, there has to be a few goals. First, differentiate yourself from the original. The plot for this Total Recall diverts from the original well enough, especially since there is no Mars. However, we still see Cohaagen trying to control a colony. The second goal should be to at least give a nod to the original, and this film has plenty of that. There are a few bits that most people will get, but there are a few more subtle ones that only fans of Arnold’s Total Recall will appreciate. Finally, if possible, the remake should improve on the original. There were two areas where I thought this film had a good opportunity to do just that. The overall look, be it visual effects, sets, or props, needed an upgrade, and we definitely got that. This post-apocalyptic world looks great when the camera actually lets us see it, and the action scenes are high octane and utilize the scenery superbly. 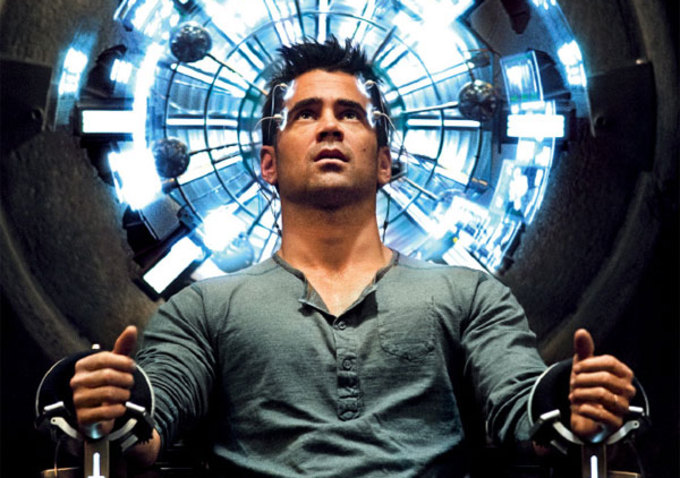 Where the movie really falters is in its wasted potential. The original Total Recall did a good job playing with our expectations of what was real and not real. Even within the reality things were murky, as I’m pretty sure Arnold’s Quaid was a quadruple agent. This film, however, pretty much just turned into a standard action flick set in a sci-fi world. There were a few key moments where I thought the movie might make an interesting turn, but instead it stayed to a formulaic plot. They should have played up the reality question a lot more this time around, as I think audiences have become more savvy in the past 20 years (see: Inception).

The performances were pretty standard overall, though Beckinsale kicked ass more than you’d expect for her character. She was such a bitch with a drive to kill Quaid, but I would have liked to learn a bit more about her and why she tried so hard. Jessica Biel plays Melina, literally the girl of Quaid’s dreams, but I didn’t feel much chemistry between her and Farrell.