Investigation Discovery airs a new series premiering September 8th called Deadly Affairs. As the show’s website explains, “Deadly Affairs tells real-life tales of love gone terribly wrong — from wandering eyes at the workplace leading to adulterous romps in the supply closet to bible-study couples tempted by lust to commit the ultimate sin — proving affairs can be murder on the heart.” Yesterday I got a package from the series which begins a complex ARG for the series. Get the breakdown of what we’ve discovered after the break. 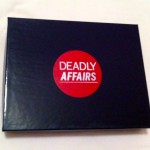 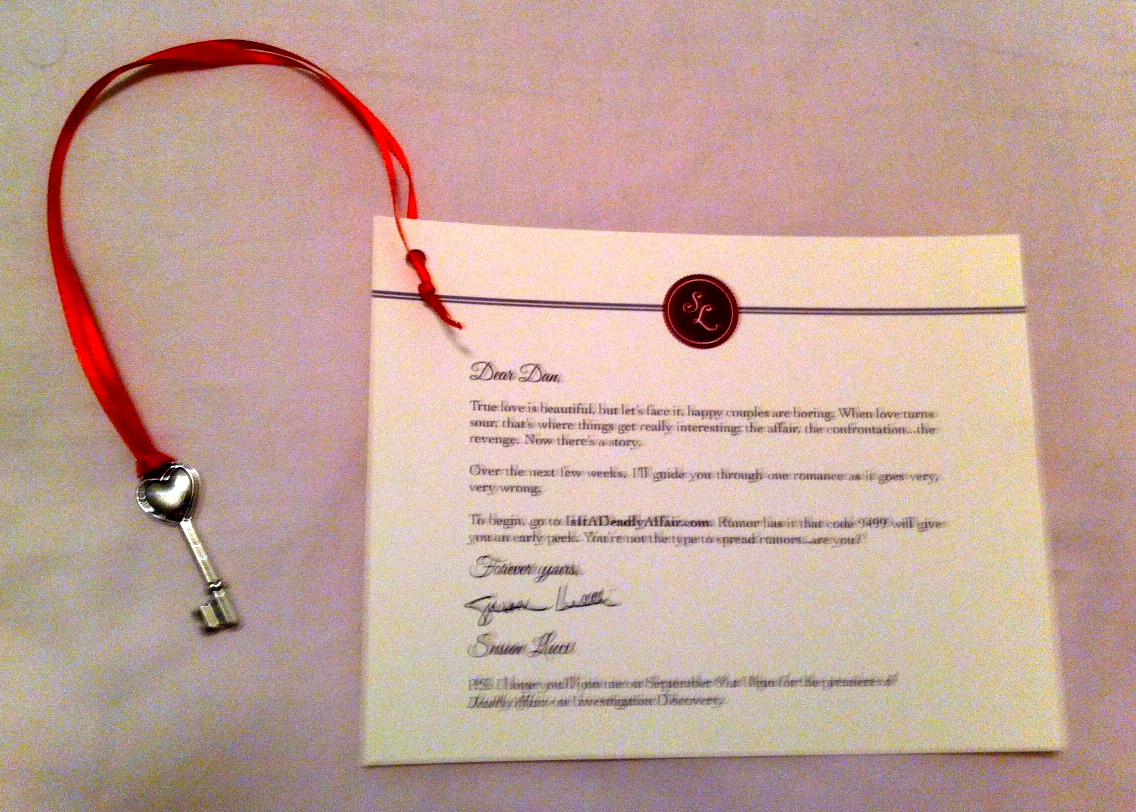 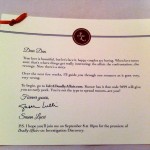 As you can see from the photos above, I received a box with the show’s title on it, and inside was a note attached to a heart key. The note reads:

True love is beautiful, but let’s face it, happy couples are boring. When love turns sour, that’s where things get really interesting: the affair, the confrontation…the revenge. Now there’s a story.

Over the next few weeks, I’ll guide you through one romance as it goes very, very wrong.

To begin, go to IsItADeadlyAffair.com. Rumor has it that code 9499 will give you a early sneak peak. You’re not the type to spread rumors…are you?

P.S. I hope you’ll join me on September 8 at 10pm for the primiere of Deadly Affairs on Investigation Discovery.

When you go to IsItADeadlyAffair.com, you will see a hope chest with a napkin on it, more on that in second. Below the chest is a message that tells a bit about the “Deadly Affairs Experience”.

What makes an affair turn deadly?
Join us for an immersive online experience following the story of one romance gone very, very wrong.

All the thrill of an affair… none of the danger.

While the website says the experience starts on August 20th, we have an early sneak peek thanks to our code on the note. Before we open the chest, however, that napkin is calling to us. The date “September 4, 1999” is a nice clue to the “9499” code for those who don’t know about the mailed packages. The website Happy-in-Love.com introduces us to newlyweds Mr. and Mrs. Robert Spencer, and provides several wedding photos. Based on the comment “Hopefully before the turn of the century” and the date on the napkin, it’s clear that 9/4/99 is their wedding date.

Now back to the hope chest. Click on the chest and move the combination lock to “9499” to access the contents. You can click on all the items to see them closer, some with a quick blurb from Susan Lucci herself. There’s a family photo of the Spencers, a Candlelight Cafe receipt from tonight (8/18/12), a Gab’s By Design clothing tag, Rob’s business card, and movie tickets to “Unicorns Vs. 3D” from yesterday (8/17/12). 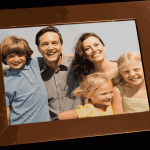 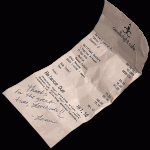 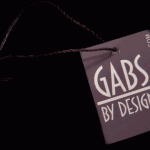 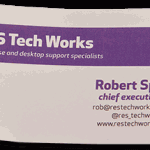 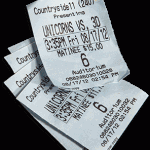 The clothing company looks to be owned by Rob’s wife Gabby. The tag has a tumblr link on it, where Gabby mentions there being drama recently, so she’s starting over and focusing on her family and the company. The tumblr also links to her company’s Facebook and Twitter pages. On both social media sites, she said this morning, “Rob won’t say where we’re going but I’m pretty sure this highway goes into THE CITY! ZOMG! No wonder I love him so much! 😀 :D”, which seems to reference the restaurant receipt we find in the hope chest.

Speaking of Rob, his business card states he is the CEO of RES Tech Works, a tech support company. The card has links to his company’s website, his Twitter, and even his email address. When you send an email, this is response you’ll get:

This is Rob, CEO of RES Tech Works. Thanks for emailing!

We’ll take a look at your email and get back to you with a few
questions we’ll need answered in order to give you a tailored
assessment of your business technology needs.

We’re 100% committed to serving your IT needs, in the Greater Albany
area and across the globe. Thanks again for reaching out!

Both Gabby and Rob mention the Unicorns movie from yesterday on their social media sites. We learn the full title is “Unicorns vs. Mechadons 3D”, and it’s apparently very weird.

There’s a lot of content and backstory to digest already, but it’ll be interesting to see where the ARG goes from here. Investigation Discovery has provided a Catch-Up page to help you get up to speed and find all of the links. Be sure to sign up to get updates on the viral, and let us know in the comments if there are any story elements so far that we might have missed. Also check out Unfiction for discussions on the campaign, including one person who got the package, but with a slightly different key.