Last night, something happened to me that has never happened before. I got nauseous from watching a movie. No, it wasn’t from a murder scene or some other act of violence. It was from the jostling motion of the camera. Yup, I literally had to stop about an hour into the film V/H/S due to nausea. The horror film is out now on VOD, and will be in theaters on October 5th. Read my spoiler-free review after the jump.

I am a fan of the “found footage” genre. I love it. I think that it gives so many opportunities to the world of horror to shock, scare and surprise. I have enjoyed them to varying degrees. V/H/S offers not one but six stories all based on found footage. All different in not only style, but also in delivery, dialogue, action, and the all important death scene.

The movie begins with Adam Wingard’s “Tape 56”. This storyline is the base for the movie on which all the other stories stand. A group of hooligans are sent to a house to find a tape and bring it back to an unknown person. Well, the house is full of tapes and these guys don’t know which one to bring back, so they grab some and play others. Enter each of the following short stories.

The first video they stumble across is “Amateur Night,” directed by David Bruckner, who also wrote the story along with Nicholas Tecosky. A couple of young guys looking to get lucky at a very loud and small club find something they wish they hadn’t. This story really was probably my favorite of the bunch. It had some cool little hints as to what might be around the corner for these three guys, as well as the only “whoa” moment of the film for me. It had the gore, it had the tension that so many found footage films can generate, and it had the whoa scene. This film was off to a good start, baring the vomit-like feeling inside me.

Next up was Ti West’s contribution, “Second Honeymoon,” which he wrote and directed. Now I did have some familiarity with Mr. West’s work, so I had certain expectations. These expectations were quickly discarded. This was not the Ti West story I thought I was going to get. The tone was subtle. The dialogue was simple and not over developed. It a little dull and predictable. Without the death scene (which was the highlight of this story, very well done), this could have been anyone’s video diary of their second honeymoon. No shocks in this one, but fitting to the overall picture. 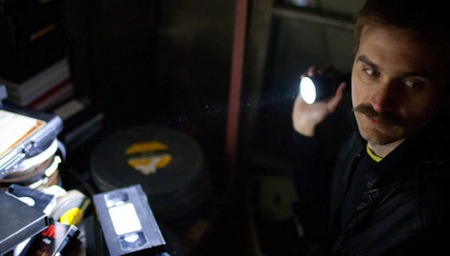 I started to watch “Tuesday the 17th,” but decided early on to call it a night and see if I could stop feeling sick. I resumed watching writer/director Glenn McQuaid’s offering at 6am. This story had your typical cast for a camping trip. You had your jock/muscle guy, your nervous nerd, your smoking hot blonde, and the quiet girl. It does however flip the roles a little and add a new twist to the “don’t go into the woods” genre, and was pretty cool to boot. Definitely a step above his 2008 offering, “I Sell the Dead.”

Next up was (deep breath) “The Sick Thing That Happened to Emily When She Was Younger” directed by Joe Swanberg and written by Simon Barrett, who also wrote “Tape 56.” This one wins for not only the longest title, but for the strangest story of the lot. I love open story lines that make you fill in the blanks. I don’t like to have everything spelled out for me. I have an imagination, and I like to use it. This one is for you of like minds. The story leads you down a path and then totally changes gears on you and doesn’t say why, doesn’t say who; virtually nothing. I can’t really say much more without having to spoil it, but this is a head scratcher. Super cool twist, did not see it coming. Bravo gentlemen.

The final tale in this anthology is “10/31/98,” written and directed by Radio Silence. Radio Silence is made up of Matt Bettinelli-Olpin, Tyler Gillett, Justin Martinez and Chad Villella. Dressed up for a halloween party, that they have trouble finding, these four guys go stumbling around looking for scares, and find them. Probably the most technically ambitious of the stories, it was a good finish to the overall film.

In the end, I enjoyed parts, I was bored by parts. I was impressed by parts, I was disappointed by parts. That’s the beauty of having six stories, you get a little bit of everything. This group of writers and directors compiled these stories and found a way to tie them all together, so we could get a taste of lots of different ideas, styles and images, and have it make sense (sort of, I’m not sure about Swanberg’s story). All in all, I enjoyed the ideas more than the execution. Did this movie live up to some of the hype that was generated? I don’t think so. Was it a bust? Absolutely not. These people have good ideas about horror, and what it means to be scared or to scare. They are all headed in the right direction as far as i’m concerned. I look forward to what each and every one of them does next. Don’t go in expecting to be amazed, just enjoy the ideas and vision of these folks. And maybe take some dramamine.