Looper is a sci-fi action film written and directed by Rian Johnson. In 2077, murder is too difficult to get away with, so the mob sends back targets to 2047 to be wacked by hitmen called “Loopers”. Joseph Gordon-Levitt stars as Joseph Simmons, a top Looper who ends up being faced with closing his loop when his future self (Bruce Willis) is his next target. The film’s viral campaign has you become part of the Looper Network, and the latest mission gives some great insight into the world of Looper.

For Mission 2, you’ve been tipped off that you can find a clue to your loop’s whereabouts in this video. After watching the interactive trailer, there are six elements that you can explore to get your six pieces of silver. They include behind the scenes photos and interviews, as well as interactive assets, like the Looper gun. This gives a great look at the world of Looper, but more importantly, when you’ve viewed all the content, director Rian Johnson gives you a clue to the code for this mission: RUTK. He also tells us not to “phone it in”, so you can guess that we are to use the letters on a phone to get the four digit code: 7885.

When you enter in the code, you see that you chased your loop to La Belle Aurore, a night club where Loopers hang out (as seen on the Looper Network website). However, you trailed too closely, so he got away. You get an email from Abe, and of course, he’s pissed. Your reward is a behind the scenes photo of Levitt in the make-up chair.

I’m not playing games, Dan. And I’m not paying you to screw off. What do you think, your loop’s just gonna stick around La Belle Aurore, kick back and enjoy the show? You want a show, I’ll give you a show. You’re gonna be the star.

Your chances are dwindling to convince me otherwise.

Report back to Looper Network and track down your loop…or else. 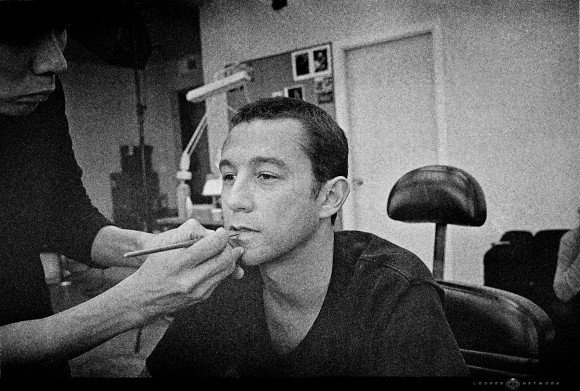 You also get an email from your loop, and it seems apparent that it’s the future you (just like in the movie), though Abe and the Looper Network never specify.

Listen to me— I don’t have much time.

By now the Looper Network knows you let me run. I know you think you know what’s best right now, that your only chance is to listen to Abe and find me before they do.

You couldn’t be more wrong.

Trust me— I’ve got our best interests at heart. Give me some space, some time to do what I need, and stay out of my way. I’ve got work to do.

Your next mission is on Tuesday, so we might learn more then. In the meantime, you can play Looper Games. Here, there are three missions: Timed Kills, TK Challenge, and Slatebike Chase. You can connect to Facebook to comprare your results and progress with friends. The games are pretty fun in a simplistic way.