Mobile Apps for “Sons of Anarchy” and “The Hunger Games”

I’ve never watched FX’s biker drama Sons of Anarchy, but it’s popularity has brought on two mobile apps that have now been combined into one. Lionsgate has also released a mobile app for their hit, The Hunger Games. Read more about the free apps after the break.

The Sons of Anarchy App is available on iTunes and Google Play. It provides an interactive experience when you watch Season 4 on Blu-Ray/DVD or Season 5 live, which debuts this week, There’s also plenty of other behind the scenes content. Below is the description on the App Store.

Combining the best features from the legacy SOA app and the SOA Gear app featured in season 4; the all new SOA app is an immersive, interactive experience bringing never before seen content exploration, shop-able gear from the show, and introducing ‘Perspective’ – a feature rich, virtual view of the SOA clubhouse.

– Explore on your own or sync with Broadcast season 5, or DVD/Blu-ray season 4 to shop the items you see on screen
– Tweet directly within the app and have your tweet represented in the Social Heat Map in the episode timeline
– Post to Facebook within the app
– New content is introduced as the season progresses
– Use ‘Perspective’ to navigate the SOA clubhouse using your devices gyroscope or using swipe mode
– Access to alternate scenes and ‘appisodes’
– Explore character bio’s and get rap-sheets of your favorite characters
– Production Stills
– Storyboards
– Exclusive trivia from the upcoming board game
– Factoids from the show 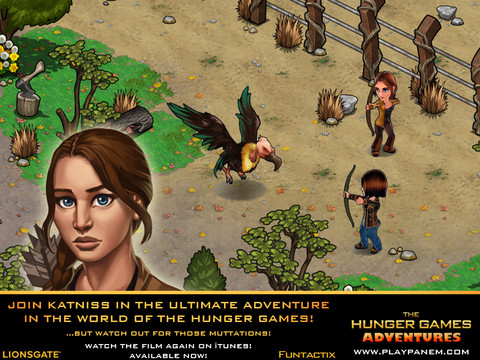 ARE YOU THE NEXT HERO OF PANEM?

In The Hunger Games Adventures, you’ll embark on a daring adventure beyond the fence outside District 12 with all of your favorite characters from The Hunger Games books and movie, including Katniss, Peeta and Gale, as well as a host of new ones!

***FEATURES***
Embark on a daring adventure beyond the fence of District 12 accompanied by your favorite characters from The Hunger Games.

Explore Suzanne Collins’ epic universe alongside Katniss, Peeta, Gale and the other characters of the novels and film.

Hunt and trap in the wilderness outside the fence, then bring it back to trade in The Hobb.

Complete quests for Cinna in the Capitol and help Rue in District 11.

If you try out these Apps, let us know what you think!