Seven Psychopaths is a comedy action film from CBS Films with an odd, yet strangely alluring, premise. Christopher Walken and Sam Rockwell are dog thieves who unwittingly steal a dog from Charlie Costello, an unpredictable gangster. After the break, find out how Costello has gone public with his efforts to find his dog.

The appropriately titled @PsychoCostello Twitter handle is home to Charlie Costello, who describes himself as “Importer/Exporter, Boss, Dog Lover.” On Twitter, Charlie talks to followers and tries to get the word out that his Shih Tzu is lost. Actually, he know that someone stole the dog from his dog walker Sharice (played in the film by Gabourey Sidibe), so his tweets are a mix of pleas for help and arbitrary threats.

It appears Charlie has also taken to the streets, as there have been sightings of his flyer, as you can see below. The phone number, (323) 989 2669, goes automatically to voicemail with a message from Charlie to leave any information you may have about Bonnie, his dog. Charlie’s message also warns that your voice message may end up on his Twitter feed. 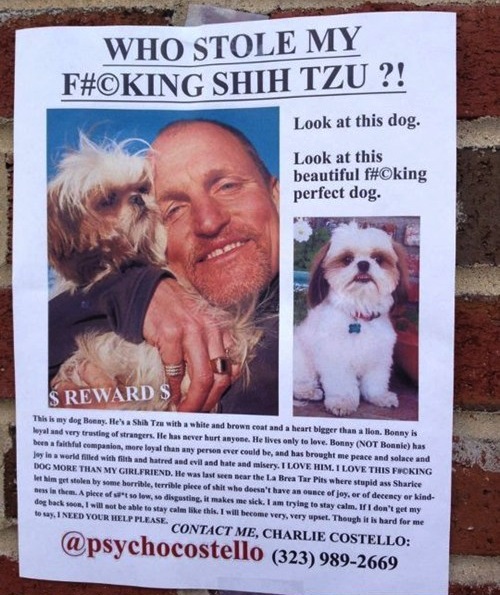