Take Command of the USS Colorado as a “Last Resort”

This week, ABC debuts their new drama series Last Resort, about a rogue US Navy submarine. You get to be in command of the USS Colorado via the Last Resort Command Center. Get the details after the break.

This interactive website uses an interface of the bridge (not sure if that’s the correct term) of the ship, and you can click various elements for such things as behind-the-scenes featurettes, clips from the show, social media links, and even an interactive version of the premiere episode. The command center also has missions that you complete to keep the boat safe, which are just simple games. Overall, it’s nothing too complicated, but I like the effort put into the website. However, I’m a bit perplexed that the entries to the Twitter ticker up top are not screened, as you can tell from my screen grab below. 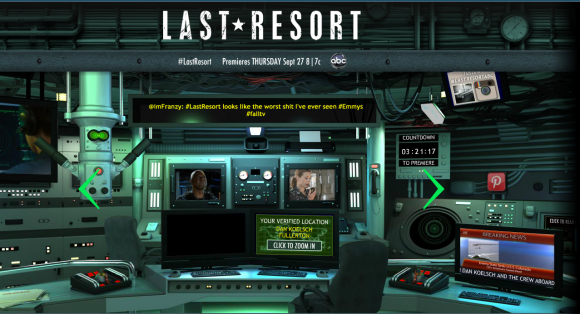 Last Resort debuts on September 27th, but you can watch the first episode now on ABC.com. I really liked the premiere, so I’m hoping the series is more of the same. Let us know what you think of the series so far in comments below.