‘Seven Psychopaths’ Viral: The Fate Of America In The Paws Of A Missing Dog

This year is an election year, and as you can imagine the two presidential candidates are addressing the issues that affect America. But Barrack Obama and Mitt Romney are neglecting the one resolution that could save America. One f*****g Shih Tzu. Yes a dog can save all our problems. And if you can find him and return him to his psychopath owner, then you may be able to save America, maybe even the world. Check out the hilarious PSA for Seven Psychopaths and viral campaign to save Bonnie, below.

In Seven Psychopaths, Colin Farrell plays as a washed out screenwriter who is friends with two idiots (Sam Rockwell and Christopher Walken) in the dog kidnapping business. For the two, business is booming. Until one of them steals Bonnie, a Shih Tzu, owned by a Charlie (Woody Harrelson), psychopathic mobster with severe emotional issues. Charlie breaks down and sends his squad to find the missing dog.

This PSA addresses the real problem that is facing America… Charlie’s missing dog.

In addition to the PSA, Charlie has posted twitter account and Facebook page to find Bonnie. There is also a numer to call if you have any tips that could lead up to Bonnie’s rescue. The phone number goes straight to voicemail, but don’t hang up, listen to the very colorful threatening message for the dognappers, if they are dumb enough to call. 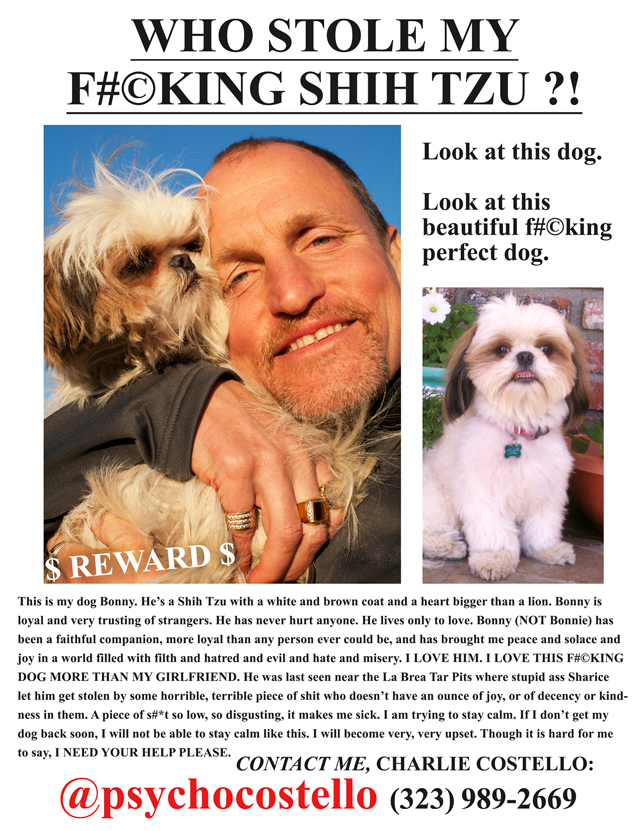 “What If” Review: A Flawed, But Also Sweet And Sentimental Rom-Com

“What If” Review: A Flawed, But Also Sweet And Sentimental Rom-Com