The world knows James Bond as the cinema’s best British spy, and some may even know his origin as the protagonist in Ian Fleming’s series of novels. What you may not know, however, is that there was a popular comic strip starring Agent 007 from 1958 to 1983. Starting in 2009, Titan Books began releasing large volume Omnibus editions that featured multiple story lines. The James Bond Omnibus Volume 004

comes out today, and I have my review after the break.

The James Bond comic strip was originally printed in the Daily Express, and soon saw syndication in both British and international newspapers. There were 52 total story arcs, and Omnibus 004 features Trouble Spot, Isle of Condors, The League of Vampires, Die With My Boots On, The Girl Machine, Beware of Butterflies, The Nevsky Nude, The Phoenix Project and The Black Ruby Caper. All of these were written by Jim Lawrence between 1971 and 1975, with art by Yaroslav Horak. 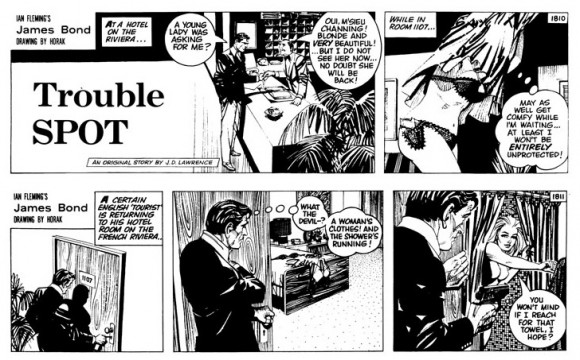 Of course, the stories are great, and they flow together perfectly despite originally being serialized. The styles of the book and comic are well-suited for Bond, and I think this series is perfect for anyone that is a fan of Fleming’s spy or classic comic strips in general.

Leave us your review of The James Bond Omnibus Volume 004, or any of the volumes in fact, in the comments below. I know fans are protective of Bond, so I’m interested to see what others think of the comic strip.