Call “Carrie” For a Bad Time

MGM’s remake of the horror classic Carrie debuted its first footage at New York Comic-Con this weekend. The studio quickly put a teaser trailer online for the film inspired by the Stephen King novel on Monday. The teaser ended with the URL WhatHappenedToCarrie.com, which redirects you to the film’s official website. This wouldn’t be very noteworthy usually, but the website provides a phone number for you to “Call Carrie”. Watch the teaser and hear what happens when you call after the break.


When you call the phone number provided, 207-404-2604, Carrie (played by Chloe Grace Moretz) picks up, and from there, things get creepy. The YouTube video below has the audio from a total of three calls, as they explain in their description.

So here’s the deal, if you call 207-404-2604 you will receive the first call on video. So sometime later, in my case a few minutes. A different number: 800-416-2816 calls you back to your phone with either the second or third message in this video (I can’t remember which it was, I think it may have been the third) then almost right after the number 800-281-6003 calls you back with the remaining message. All for a total of three calls with different messages.

As the uploader mentions, it is pretty hard to understand a lot of what is being said, but I don’t think it’s necessary to get the point. It will be interesting to see if more calls come in, and if it becomes more than just creepy messages. Let us know your thoughts in the comments below.

The quiet suburb of Chamberlain, Maine is home to the deeply religious and conservative Margaret White (Julianne Moore) and her daughter Carrie. Carrie is a sweet but meek outcast whom Margaret has sheltered from society. Gym teacher Miss Desjardin tries in vain to protect Carrie from local mean girls led by the popular and haughty Chris Hargenson, but only Chris’ best friend, Sue Snell, regrets their actions. In an effort to make amends, Sue asks her boyfriend, high school heartthrob Tommy Ross, to take Carrie to prom. Pushed to the limit by her peers at the dance, Carrie unleashes telekinetic havoc. Carrie is directed by Kimberly Peirce and written by Roberto Aguirre-Sacasa.

Which Carrie character are you? 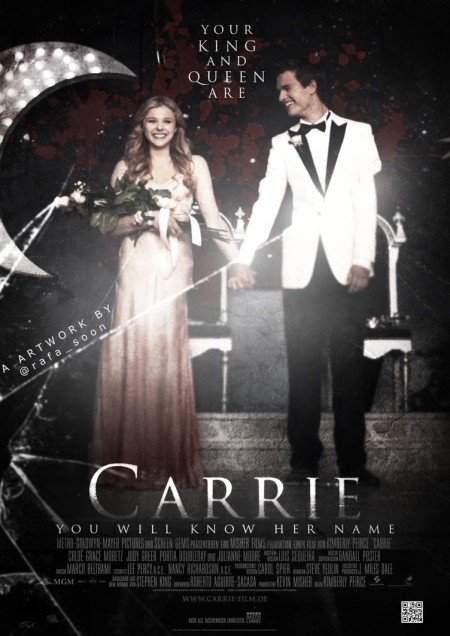