We at MovieViral know our viral videos pretty well, so we decided to share our knowledge to those looking to expand their Internet horizons. YouTube Tuesday is a weekly feature where we shine the spotlight on our favorite YouTube channels related to movies and television. We focus on channels that provide new videos on a regular basis, especially ones that we feel need more exposure. This week we take a break from the amateur stuff to feature the YouTube channel of Disney’s Wreck-It Ralph.

Disney has been playing up the movie’s theme in its marketing big time. The animated feature is about an arcade video game bad guy that jumps games in an effort to win a medal. We’ve seen online versions of the video games featured in the movie, and there have even been physical versions of Wreck-It Ralph’s game Fix-It Felix, Jr. in some theaters.

Now, the film’s YouTube channel gets in on the fun with a game of its own. When you go to the channel, you get a splash page (aka a “brand takeover”), where you have to fix the mess Ralph has caused to the channel’s page. You can also go back to the game through this link. 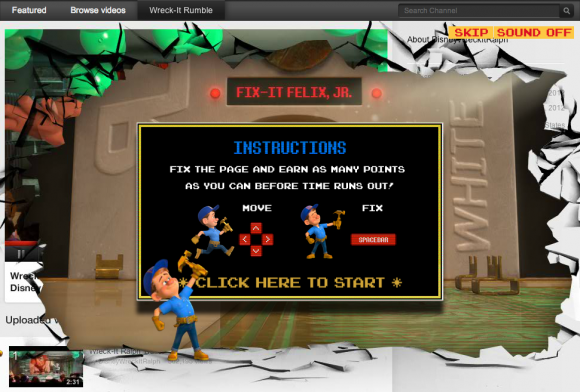 Wreck-It Ralph is in theaters this Friday. I definitely recommend it, and you can see Michael’s full review right here.

Have an idea for YouTube Tuesday? Let us know in the comments below!