“The Man With The Iron Fists” Review: RZA’s Directorial Debut Is Noble But Fails To Land Any Punches

Sometimes when you create the story, write the screenplay, direct the film, and have a role in it as well, it can be too much for one person to take on. RZA of the Wu-Tang Clan is not only a talented artist, but has a huge affinity for classic Kung-Fu films. He prides himself in his collection of those classics, which is the basis of his directorial debut The Man with the Iron Fists. Trouble is, he may bitten off more than he can chew. Hit the jump for the full review.

Believe me when I say this, but I really wanted to like The Man with the Iron Fists, I really did. But it is like someone piled the footage together, detonated a bomb, and whatever landed on the floor would be the final cut of the film. So it’s really going to be hard to find anything good to say about this messy film – and I am not talking about the amount of blood that is split in this movie.

The film is set in China before the dawn of the Emancipation Proclamation. We find an educated African blacksmith (RZA) who has knowledge in the Martial Arts. Unfortunately his talents have brought him to the Jungle Village where crime and prostitution run rampant and villagers must turn a blind eye to it in order to survive. In order for the blacksmith and the love of his life (Jamie Chung), who also happens to be a prostitute, to make it out of the village alive, they accumulate their earnings into one stockpile.

But a shipment of gold that must cross through the village catches the eye of China’s greatest criminals. So with swift action, Silver Lion (Byron Mann) and Bronze Lion (Cung Le) kill their leader, Gold Lion, and creates an alliance with the nefarious politician Poison Dagger (Daniel Wu) and Brass Body (David Bautista) a deadly strongman who has the ability to turn his body into solid brass. But a mysterious knife-wielding westerner named Jack Knife (Russell Crowe) joins the fold of obtaining the gold for his own reasons, and a madam appropriately named Madam Bloosom (Lucy Liu) looks to take the gold for herself.

It’s really difficult to pin point where the flaws in this film are just because there are so many. Iron Fists seems to jump around sporadically and lacks any sort of fluidity that would make the film bearable to watch. A lot of the sense seem to be out of order which makes the film all the more confusing to watch. While the characters in the film have their motivations to obtain the gold, their intentions for how they will use it is unclear. It seems like they just want to gold and whatever happens after just happens. And because the film lacks any structure it’s hard to get a read on the film’s pacing, so it feels like you are watching a movie that never stops.

Another issue with the film is the terrible camera work. As much action as there is in this film, the shoddy camera work makes the sequences look terrible. Again, it lacks any sort of fluidity as the action sequences are constantly cutting to the other camera, which makes it look like each sequence was shot in many takes.

There is one glimmer of hope in this film though and it’s Crowe’s role as Jack Knife. A womanizing westerner who actually gets cardinal pleasure from killing people with his knife that can twist and shoot spur-like projectiles. Just like the kind of characters before him, he makes sex and killing look so cool. Women are swooning to be with him, and those who oppose him will rue the day they crossed him. He does have a soft spot for protecting those who cannot protect themselves, so there is some chivalrous likability there.

There is a sense of ambition and love within The Man with the Iron Fists. RZA has the knowledge and knowhow on what it takes to make the perfect Kung Fu movie, after all, he has a large collection of films in his library. But even with all the manic and crazy action scenes in this movie, it isn’t enough to wipe away the red in this movie. 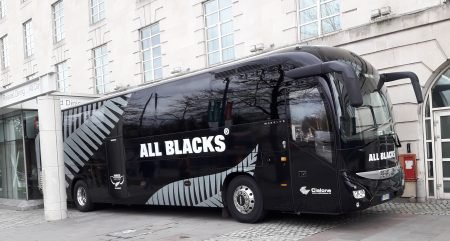