We haven’t seen much from Zack Snyder’s Man of Steel since July, when trailers were released with The Dark Knight Rises. Warner Bros. will attach another trailer with The Hobbit: An Unexpected Journey next month, but they’re giving you a chance to get a look at some exclusive content early! More after the jump.

The countdown to the home release of The Dark Knight Rises on Blu-ray early next month has begun. In a similar move by Marvel last month to unlock the Iron Man 3 trailer, Warner Bros. is asking fans to share the news of the TDKR Blu-ray release with their friends on Facebook, Twitter and Pinterest. Just visit the countdown site and click the ‘Share’ button.

Once the meter hits 100%, a reward will be reveal an exclusive look at Man of Steel! 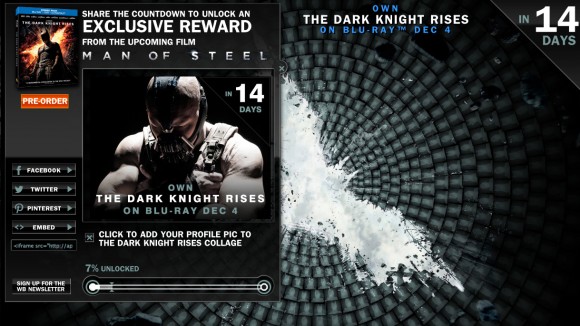