The documentary Let Fury Have the Hour, written and directed by Antonino D’Ambrosio, opens in New York today. The film chronicles the creative response to the directions our politics and culture starting taking in the 1980s, and it features interviews with a bevy of artists. Read my review after the break.

Through artists of all different media, including street artists, musicians, poets, and more, the film details how art has become a form of protest and public awareness as a reaction to the changes in Western culture. Ronald Reagan and Margaret Thatcher helps usher in a new wave of individualism and consumerism that destroys the natural ideas of community. It’s a pretty stark portrayal, and necessarily so to help explain the artistic movements it created. From punk rock to rap to street art, art became a way for people to express their frustrations with the system we are stuck in. An outlet from a political system that doesn’t want to hear your voice and a culture that wants you to conform. 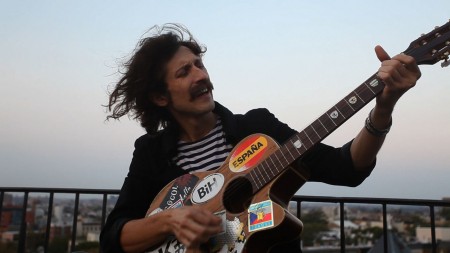 I find documentaries hard to review, but there are a few criteria I look for when watching. It has to be engaging, intellectual, informative, and have a clear message. Thanks in part to sharp imagery and a soundtrack provided by the artists interviewed, the film definitely gets your attention. However, it’s a bit light in the other areas. There aren’t a lot of hard facts, and the only interviewees I recognized (out of 50) were Public Enemy’s Chuck D, Rise Against the Machine’s Tom Morello, and comedian Lewis Black, so it’s hard to verify their credibility. The film heavily skews to covering music as opposed to other forms of art, and there is not much focus overall. I’m not sure what the message is supposed to be, other than to keep making art. Not exactly ground-breaking stuff. The heavy-handed introduction to Reagan and Thatcher really caters to liberals, clearly throwing away any desire to appear objective or comprehensive.

While there are some nice ideas trying to get through, the film is bogged down by lacking focus and pandering to the far left. Even I had to roll my eyes a few times, and I’m practically a Green Party member. It’s a shame that the film prefers style over substance, because a real discussion about art as a creative response would be fascinating. Maybe then more people would consider themselves a citizen of the world.

Let Fury Have the HourMovie Review