“You can tell they aren’t really singing, the emotions aren’t there.” That’s what people used to say about stage musicals adapted to film. Tom Hooper took on Les Misérables determined to make sure that the adaptation of a musical into a major motion picture will never be done the same way again. Hooper and Universal took a gamble with capturing the actors singing live, instead of using a pre-recorded soundtrack and the cards were dealt in their favor.

People familiar with the stage version of Les Mis know the tale, but for those whose first experience will be the movie, I will give a brief synopsis. Les Misérables is the story of Jean Valjean, a man convicted for stealing a loaf of bread. After serving his sentence of 19 years, he is released on parole, but is hunted by Javert, a man of the law convinced that criminals can never truly change. Valjean does change, and meets a young woman, Fantine, who is working as a prostitute to make money for her daughter, Cosette. The story takes place before and during the June Rebellion of 1832.

Being familiar with the musical, I was very much looking forward to seeing this film. I was excited by the choice to have the actors perform the songs live because Les Mis is such an emotional piece, doing a pre-recorded soundtrack just simply would not do the score (or the film) justice. 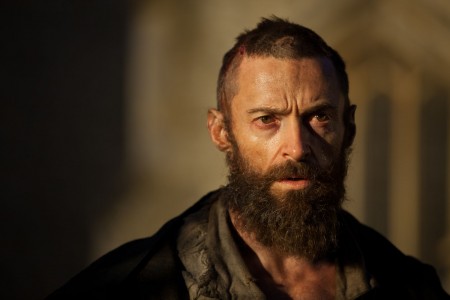 Hugh Jackman plays Jean Valjean, convicted for stealing a loaf of bread. For everyone going into this film with Wolverine on their minds will have that image completely wiped from their minds by the end of this film. Jackman plays Valjean well with the anger and hatred of not just the world, but God, for punishing him when he was just trying to save his nephew. It’s when Valjean meets a priest (played by Colm Wilkinson, who originated the role of Jean Valjean on stage) who shows him kindness and forgiveness, that Valjean truly changes. Jackman’s singing voice is good, but it gets tiring and repetitive because he seems to sing every song in the same key.

Like a Terminator, relentlessly pursuing Valjean throughout the film is Inspector Javert (played by Russell Crowe). When he releases Valjean for parole, Javert doesn’t believe that criminals can leave the life of crime. Crowe delivers a very powerful performance as the great, but conflicted inspector, especially during Javert’s prayer about and for justice, “Stars”. His singing voice is strong, but like Jackman’s, becomes dry and repetitive. 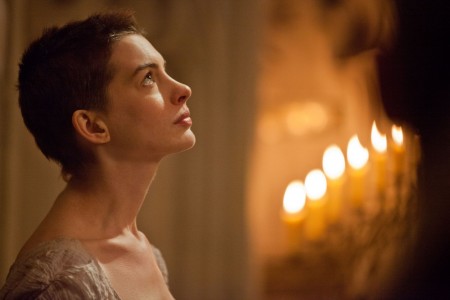 Anne Hathaway stars here as Fantine, in a reverse Princess Diaries transformation. Fantine is a pretty factory worker turned prostitute trying to support her only child who now lives with greedy innkeepers, the Thénardiers (more on them later). Hathaway truly shines in her very short screen time, delivering the realest performance of showstopper “I Dreamed A Dream” ever!

The supporting cast is comprised of some musical film veterans as well as actors reprising their roles from the Broadway and West End stagings of the musical. Sacha Baron Cohen and Helena Bonham Carter, both previously starring in Tim Burton’s Sweeney Todd, provide much needed comic relief as the Thénardiers; a sneaky, greedy couple who run a shady inn in Paris while “caring” for Fantine’s child, Cosette. 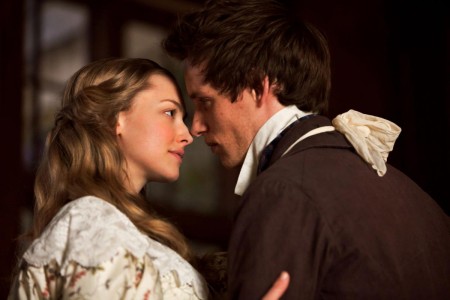 Amanda Seyfried plays an older Cosette. Seyfried is excellent in the role and I was quite surprised by her pretty, fluttering voice. Eddie Redmayne is cast as Cosette’s love interest Marius. When we first meet Redmayne’s Marius, he is protesting with his fellow students just before the June Rebellion. Redmayne doesn’t seem to be confident with his singing later on in the ABC Café during the number “Red and Black”. There is one shot where he looks as though he’s straining to get the note out. However, he shapes up quickly and finishes the picture strong.

In a strange love triangle, the Thénardier’s daughter, Eponine (played by Samantha Barks reprising her role from the stage), falls in love with Marius who seems to only love her as a friend. It’s the heart-breaking tune “On My Own” where Eponine laments the budding romance between Maruis and Cosette. 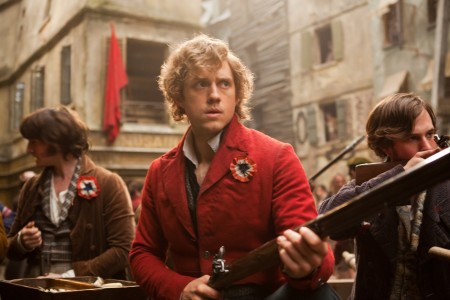 One thing you’ll notice right away is, of course that this film doesn’t sound like musical films. The live recording worked remarkably well as the actors were able to inject the right amounts of emotion into their performances that they would not have been able to by pre-recording a soundtrack. It also doesn’t look like others and that is because Tom Hooper shot all of the songs in close-up, rarely cutting away from the actors so that we can see all of the pain, anguish and love radiate from their faces. There are also sweeping, vividly colorful shots of the various locations throughout the film. My favorite is the opening shot underwater then up and over a massive ship being pulled into dock by Jean Valjean and the other prisoners. I will also say this, bring a box of tissues with you because, unless you’re a robot, there will not be a dry eye in the house by the time the credits roll.