Paramount Digital Entertainment released its Star Trek Into Darkness mobile app this week on the Apple App Store and Google Play Store. Using new technology created by Qualcomm Labs, Inc., users will be able to unlock content from the film by participating in scavenger hunts and other real-world missions which will be unlocked as the film’s release date draws closer. After the jump, we’ll give you a look inside the app’s current features.

Right now, there isn’t much to do with the app. When you first download it and sign up, there are several missions that one can complete in a matter of 5 minutes. A lot of the missions ask for stills to be scanned and then a “reward” (the image you just scanned) is unlocked. Completing each mission gives you points and move you up the ranks in Starfleet. Two missions require users to watch the announcement teaser as well as the teaser trailer. 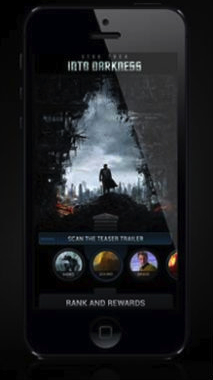 There is one location-based mission, visiting the future home of Starfleet in San Francisco, which will be quite challenging to complete if you don’t live in the area. Though I have read on forums and other sites that some users are able to trick the app into thinking they are in San Francisco.You can also enter a contest to win tickets to the U.S. premiere of Star Trek Into Darkness. Expect more missions to become available tonight as Super Bowl XLVII gets under way. Also be on the look out for the The first app exclusive surprise to be unveiled during the second quarter. 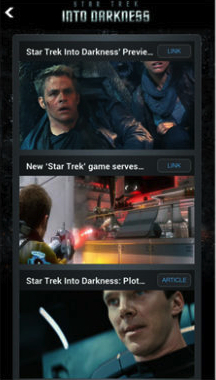 Many people were wondering about is this app’s connection with the AreYouThe1701? website. So far, there isn’t, but the app itself is a self-contained viral campaign. The app’s contents will grow as you complete missions as a member of Starfleet. Content will also be released as May 17th gets closer. Collider reports that this app will also be used to release news and exclusive content for future installments in the Star Trek franchise. 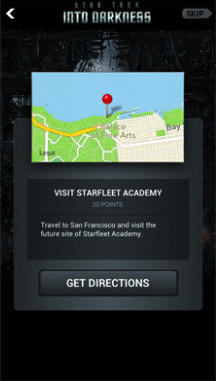 Overall, the app is very user-friendly and easy to navigate. It has a great News section where you can read all of the latest information about Star Trek Into Darkness. Exclusive goodies will be released down the line such as backgrounds for your phone and clips from the film. One thing I’d like to see improved is the difficulty of the missions. They’re just too easy right now, especially the photo scanning missions where you just do a Google Image search. The Star Trek App is now available on Apple’s App Store and Google’s Play Store!