Though these poster have been out for quite some time, it is important to acknowledge the viral potential it has. The new victory posters for Lionsgate’s The Hunger Games: Catching Fire are out, and if you are familiar with the novel, then you will recognize immediately that the Victory Tour is just one of few the central plot devices that keeps the book moving forward and now we got our first look at these posters which could possibly lead to a viral campaign. check it out below.

I’ll say this about these posters, they are very sleek and very stylish, of course since there is an emphasis on the latter in the books it does make a lot of sense. These posters do indicate that we won’t be getting the same old district placement campaign we got last year, and i doubt that we are going to see Jennifer Lawrence and Josh Hutcherson parade around the country for a “victory tour”, although the thought is nice. I could see uprisings and protests themed viral campaigns being held though.

But all of this actually links back to the previous district placement campaign. These posters make us aware that Katniss and Peeta were victorious in The Hunger Games, and that the victory parade is coming to our district very soon. 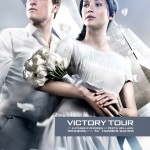 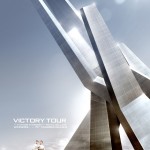