The BBC’s Sherlock has had a strong viral presence since debuting in 2010, as we’ve talked about before. The modern day retelling of Sherlock Holmes has a huge fanbase, including on Reddit, where someone recently found a review on the Cardiff Violin website done by John Watson on behave of Sherlock Holmes. Holmes uses a Cardiff Violin in the series, and Watson gives a glowing review. While the review date is almost 2 years old, this is the first time many people have seen it. Read the review after the break. 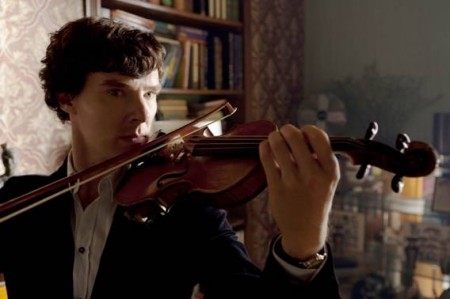 Cécile and Chris at Cardiff Violins,

I just wanted to say thanks on behalf of my friend Sherlock Holmes for the violin he recently purchased from you. He would thank you himself; only, well Sherlock doesn’t really do that sort of thing.

You were extremely patient with him, much more than he deserved which I should also thank you for, as a lot of people find him ‘difficult’. Thought you handled the situation very well, especially when he insisted on deducing the history of each instrument he picked up, in addition to identifying the rosin dust from each bow that had previously been used! Anyway sorry about that, he’s always like it and yes it does get annoying, but at least you don’t have to live with him.

I don’t know much about violins myself, but it looks a lovely violin to me. The sound it makes when Sherlock plays it is beautiful and the other evening he treated me to a rendition of Bach’s Partita No.1, which sounded particularly marvelous on it. He seems very pleased anyway, that is to say he hasn’t complained at all and tells me playing it helps him think, which believe me is high praise indeed.

This seems to be from the production team, as signified by the “Hartswood Films Ltd” at the end. I like that it’s buried at number 6 on the testimonial list. If you ever find anything cool like this, let us know!