Our coverage of WonderCon 2013 continues with the big Hollywood panels from Saturday in the Arena. After the break, read some of the highlights from panels for The Conjuring and Pacific Rim.

Most people haven’t even heard about The Conjuring, which is directed by horror’s new golden boy James Wan. The film is based on the true story of famed paranormal investigators Ed and Lorraine Warren assisting the Perron family when their Rhode Island farmhouse seems to be haunted.

We got to see two clips from the film. First we saw Carolyn Perron (Lili Taylor) and her young daughter Cynthia (Mackenzie Foy) playing hide and seek, where Carolyn could ask Cynthia to clap up to three times to help her out. Things turn creepy when the final clap does not come from Cynthia. Later that night, Carolyn hears the clapping again, but things quickly escalate to the point where Carolyn gets stuck in the basement with no light. The next clip has other daughter Christine (Joey King) getting her leg pulled in bed by an invisible force. She then sees a figure behind the door (which we cannot see), and when Nancy (not sure who this is) goes to investigate, the door slams shut. Both of these clips show how atmosphere and sounds are going to play a major role in the film’s scariness, and it worked here. The audience loved the footage, and they didn’t have to reveal very much.

The panel consisted of Wan, the real Lorraine Warren, and even the two real Perron sisters Andrea and Christine. Wan was attracted to the film because he doesn’t have anything to prove in the horror genre, and he wanted to do a true story that actually stayed close to the real events. He was also surprised that he hadn’t heard about the Perrons. Wan stated that very little was changed in the film, and Andrea agreed with him, even being surprised by how closely it followed the true events. He set out to make the film feel contemporary while setting it firmly in 1970, when the events occurred. What you might be most surprised to learn is that the MPAA gave this film an R rating despite it not having any gore, swearing, or sex. In fact, Wan wanted to make the film PG-13, but the MPAA deemed it too scary. Wan is just happy that the studio didn’t try to mess with the film to get the PG-13 rating. The Conjuring is out in theaters on July 19th, 2013.

Out of all the panels for the day, this was probably the most anticipated outside of Evil Dead. The film is about giant monsters from the ocean called Kaiju who keep attacking us, so we built giant robots called Jaegars to stop them. Guillermo Del Toro took the stage to generous applause, and we went right into a new trailer that would only be shown here and at CinemaCon. There was lots of action, including one robot using an oil tanker as a baseball bat to hit a monster in the middle of Hong Kong. The audience loved it, with many even giving a standing ovation.

Despite the amount of effects work on the film, there were still plenty of physical sets. Del Toro wanted to convey a sense of awe and scale that only the inclusion of physical sets could do. They had so many sets that they took up an entire Toronto studio and then some. They even built several blocks of Hong Kong just to destroy it. There was a lot of physical work for the actors in the robots, but only Rinko Kikuchi never complained.

The film uses a lot of visual detail to show a world that has gotten used to the Kaiju, as we see with Kaiju warning signs, and especially with Ron Perlman’s character Hannibal Chow. Chow is a black market dealer of Kaiju organs, even selling them in powder form for treatment of erectile dysfunction. World War II was a big inspiration for the look of (obviously) a world at war. Del Toro also talked about Charlie Day, who plays a “punk rocker scientist” as he calls it. Del Toro is a big fan of It’s Always Sunny in Philadelphia, which is how he thought of Day for the part.

During the Q&A, Del Toro explains that there eventually were a total of nine Jaegars and twelve Kaijus designed for the film after whittling them down American Idol style. He wanted each Jaegar to represent a country, and a lot of thought when into almost every aspect of their designs. Motion capture was not used on the film, because Del Toro wanted the robots to feel big, so they had to move slow and deliberately.

Del Toro also talked about how important it is to make sure the studio wants the same movie as you. When he made Mimic, the studio wanted something like Alien. The difference made the experience (and the film) terrible. So, at the end of the day, it’s up to you make a good movie. If you can’t, then walk away.

Finally, we learned that there will be a prequel graphic novel for the film called Pacific Rim: Tales From Year Zero, which will cover more of the backstory and mythology of the Kaiju and human characters. Check out the cover below. Also, I recommend reading /Film‘s of this panel for even more highlights and info on the graphic novel. 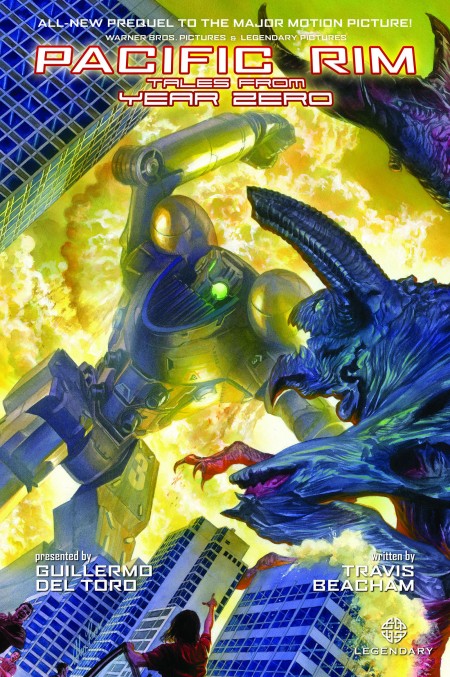