It’s all coming together now. The Man of Steel viral campaign reignited yesterday with a static video on the film’s homepage that led us to a countdown in the source code. Now the campaign’s first viral website is back in the thick of things, possibly leading us to the new trailer. Get the details after the break.

Back in December, Warner Bros. had a viral website called the Deep Space Radio Wave (DSRW) Project where fans had to decode symbols to get access to a countdown. That countdown lead to the 2nd trailer for Man of Steel. Now, the site has started up again, this time asking us to decode a new message.

IN DECEMBER OF 2012, YOU HELPED DECODE A SERIES OF TRANSMISSIONS THAT WERE MISTAKENLY IDENTIFIED AS DEEP SPACE RADIOSIGNALS BUT WERE IN FACT TRANSMITTED FROM ELLESMERE ISLAND IN ANTARCTICA. DESPITE THEIR EARTHLY ORIGIN, THE SYMBOLS THAT WERE DISCOVERED CANNOT BE TRACED BACK TO ANY KNOWN LANGUAGE.

TODAY WE RECEIVED A NEW TRANSMISSION BELIEVED TO BE AN EXTENSION OF THE LANGUAGE DECODED LAST YEAR. THIS TIME, WE HAVE CONFIRMED THE MESSAGE HAS BEEN TRANSMITTED FROM SPACE. 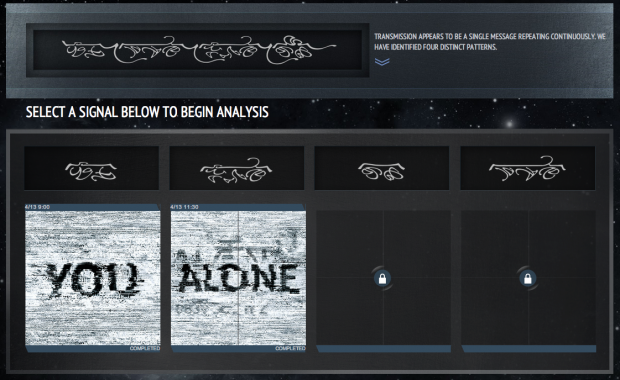 As you can see in the screenshot above, the first 2 of the 4 transmissions have been decoded to be “YOU” and “ALONE”. The last two transmissions are still locked, but considering the first two were 90 minuts apart, we should see the results very soon. My guess is that it says “YOU ARE NOT ALONE”, and that we’ll get another countdown that matches what we found yesterday, thus leading to the 3rd trailer. We’ll update this article once the final two transmissions are decoded, so stay tuned.