All aboard the Man of Steel viral train, because we got another stop on our way to the new trailer. After a flurry of updates involving the DSRW Project website and the Man of Steel homepage itself, we now have some real life outdoor marketing that ties into it all. Get the details after the break.

To get you up to speed, the Man of Steel homepage has had white noise (static) since Friday that you have to click through to get to the website. It turns out the static is a video loop, and it updates every few hours to becomes just a bit clearer. We can tell now that it’s almost definitely the chest emblem of General Zod, the antagonist of the new Superman movie. The DSRW Project website had also been updated with a new transmission that they claim was from space this time, and it was decoded to say “YOU ARE NOT ALONE”. The Man of Steel homepage’s source code also has a timer that is running down to 5pm PDT today (originally thought to be Monday at 6PM PDT). So, it’s expected we’ll get the 3rd trailer for the film (which has been confirmed to come out sometime soon by various sources) tonight, possibly corresponding with the fact that star Henry Cavill is presenting at the MTV Movie Awards tonight as well.

Today, the Man of Steel fan Facebook page, who has been on top of this development from the beginning, got a picture of two billboards in the Los Angeles area. One is just the Superman emblem on static background that is similar to the pre-roll on ManofSteel.com, but the other is more interesting. On the same background, it has Kryptonian numbers. Because you always have turn things into URLs, we get IP “168.161.242.137”, which is IWillFindHim.com. Unfortunately, that just redirects to the Warner Bros. website, but don’t be surprised if the URL gets used very soon. 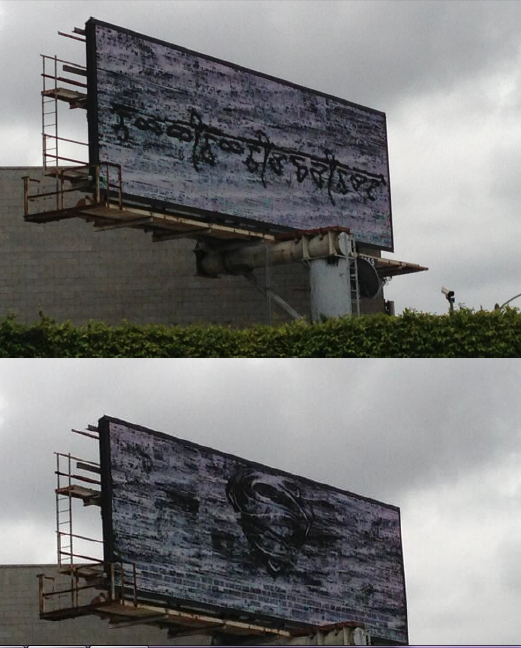 All of this makes it look like General Zod is looking for Kal-El (aka Superman), but I don’t want to presume to know any of the film’s plot. We’ll keep you updated on this development, especially if there is a new trailer. Man of Steel opens in theaters on June 14th.