MGM’s Carrie remake is still a ways off, but those starving for some insight into the teenage outcast’s history and how she became so special might find some enlightenment with this series of clues that helps bring into the light many of the mysteries surrounding her unique condition. Discover more about the girl behind the name after the break.


A little over 6 months ago, the fine folks over at MGM invited us to know her name, and it all started with a phone call to Carrie herself which we covered way back in October of last year. Since then, there have been numerous reports posted to their official Carrie awareness blog at YouWillKnowHerName.com that have been slowly introducing us to the assorted history behind the troubled teenager’s life. 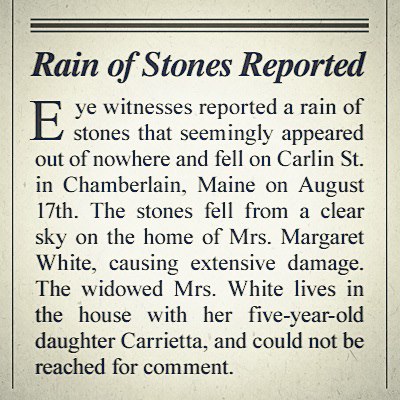 Comprised of newspaper clippings reporting on the strange occurrences around Carrie’s home during her childhood, notes from Carrie herself with overtly ominous tones and even some official documents such as her birth certificate which has some glaring omissions and a High School report card that makes mention of her anti-social behavior, it all hints towards something much more sinister brewing inside Carrie than meets the eye, which will only be answered this coming October during Prom night.

A reimagining of the classic horror tale about Carrie White (Chloë Grace Moretz), a shy girl outcast by her peers and sheltered by her deeply religious mother (Julianne Moore), who unleashes telekinetic terror on her small town after being pushed too far at her senior prom.

Based on the best-selling novel by Stephen King, Carrie is directed by Kimberly Peirce with a screenplay by Roberto Aguirre-Sacasa.

Remember to keep up with all the latest gossip on Carrie by going to the Official Carrie Facebook page.

Be sure to check out Carrie when it releases this Halloween on October 18, 2013.