Do you always agree with the general populous when it comes to movies? Then our newest feature, For Your Reconsideration, may not be the right one for you. Twice a month, I will provide my own review to a poorly-reviewed movie that I actually like. Hopefully my reviews will inspire you to give a film a second chance. If you already enjoy that title, then maybe this will inspire you to spread the word. Today, I’m reviewing the 2002 sci-fi epic The Time Machine. 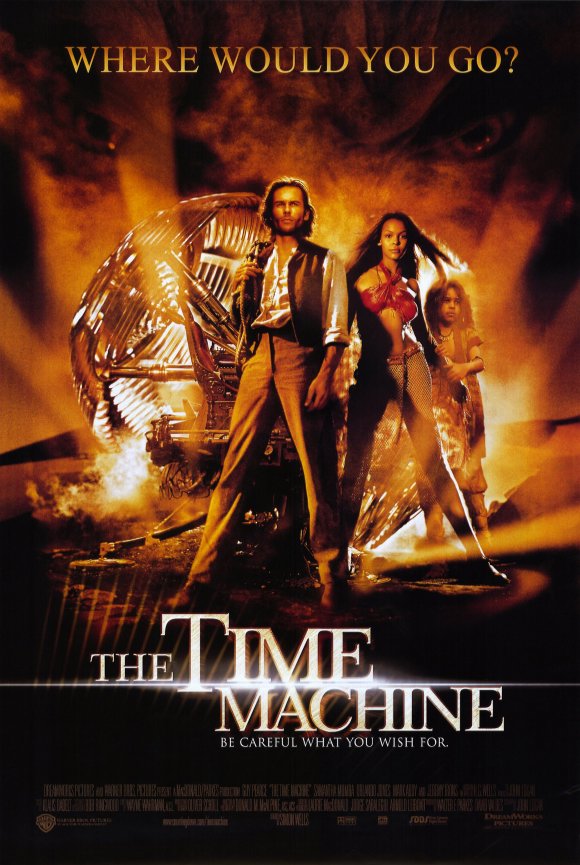 CONSENSUS: This Machine has all the razzle-dazzles of modern special effects, but the movie takes a turn for the worst when it switches from a story about lost love to a confusing action-thriller.

The Time Machine is an adaptation of the 1895 sci-fi novel by H. G. Wells and the 1960 film, all of the same title. The film starts off in 1899, where Dr. Alexander Hartdegen (Guy Pearce) is a young teacher and inventor at Columbia University in New York. He tends to get wrapped up in his work, which is why he is late for date with his girlfriend Emma. He proposes to her, but the two are mugged, and Emma is killed in the process.

Four years later, Alex has completed a time machine meant to send him back and save Emma. However, she dies a different way, and Alex realizes that he can’t change the past for some reason. So, he goes forward in time to try to figure out why, but ends up over 8 million years in the future. Here, humans have split off into two species, and a mysterious force controls the monstrous Morlocks.

I love a good time travel movie, and The Time Machine may not be a perfect film, but it definitely satisfies my hunger. Even the worst reviews have to admit that the special effects are pretty impressive for the time. However, I think that the philosophical themes of the film are what I like the most. Unfortunately, the movie is barely over an hour and a half, so it only scratches the surface of some interesting questions like “Have we gone too far with technology”, and “Why can’t we change the past (and should we)?”.

Since the film is so short, the plot is pretty straight forward, and we only get to see Alex’s stops along the way for a short time. The subplot about us accidentally blowing up the moon serves the “gone too far” theme nicely, and the depiction of 2030 wasn’t too crazy. The story doesn’t get any real teeth until we get to 8 million BC, where the divergence of the human race and emergence of the Über-Morlock turns the film into a bit more of a thriller. I didn’t mind the change, and I think it improves on the novel’s less visual plot.

Overall, I think this is definitely a film that deserves a second chance. If you haven’t seen it, don’t be swayed by the critics. It’s a nice little short and sweet sci-fi film that raises a few interesting questions about mankind.

For Your ReconsiderationThe Time Machine