Do you always agree with the general populous when it comes to movies? Then our newest feature, For Your Reconsideration, may not be the right one for you. Twice a month, I will provide my own review to a poorly-reviewed movie that I actually like. Hopefully my reviews will inspire you to give a film a second chance. If you already enjoy that title, then maybe this will inspire you to spread the word. Today, I’m reviewing the 1993 action comedy Last Action Hero. 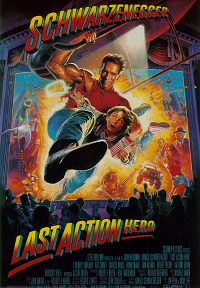 
Last Action Hero had the makings of the perfect 80s/90s action flick. You have a script co-written by my favorite writer Shane Black, who revolutionized the buddy cop comedy genre with Lethal Weapon. You have a director in John McTiernan who has helmed some of the most iconic action films ever in Predator and Die Hard. You had the biggest action star of the time (and possibly still) in Arnold Schwarzenegger. Finally, you have a unique idea that combines action and comedy in a way that perfectly fits all of these people. How could you go wrong? Unfortunately, the movie made on $137 million worldwide on a $85 million budget. When you factor in marketing costs, the film was a net loss for Columbia Pictures. The combination of poor reviews and bad timing (it opening the weekend after record-breaking Jurassic Park) were just too much to overcome.

Danny Madigan (Austin O’Brien) is a troubled pre-teen in New York who loves Jack Slater movies. The action films star Arnold Schwarzenegger as a no-nonsense cop with a one-liner for every situation; the epitome of the cheesy 80s action film. Danny sneaks out of his apartment while his mother is at work to see a midnight private screening of Jack Slater IV. The owner of the rundown theater, Nick (Robert Prosky) gives Danny a golden movie ticket given to him by Houdini. While watching the movie, Danny gets magically transported into the screen. He ends up helping Slater solve his latest case, but things turn for the worst when the bad guy Benedict (Game of Thrones‘ Charles Dance) gets a hold of the ticket and takes advance of the power in the real world.

Honestly, I don’t know why people don’t like this movie. It’s hilarious, has tons of action, and is a pretty original idea. Sure, we’ve seen spoof films before, but this is a satire of the overly cheesy and predictable actions films of the last two decades of the 20th Century. Instead of taking a judgmental tone (as the original script apparently did), Black’s version embraces the genre as comfort food with protagonists that are easy to root for. I like that everyone involved, especially Schwarzenegger, are able to poke fun of themselves. There are a bevy of cameos as well, many of whom have worked with Schwarzenegger in the past.

At 130 minutes, you can argue that the film is too long, but I didn’t feel the length when re-watching it for this review. It moves pretty quickly, and in general is just a fun ride. All the cheesiness that may be putting people off is intentional. The themes of heroism and bravery are a bit muddled, but there is some surprisingly good character moments. We see Jack Slater dealing with the knowledge of being a fictional character, and he comes out better for it in the end. I definitely recommend you giving this a try if the reviews have scared you off. you can actually watch it for free right now on Crackle.